A complete guide to Blueberry Kush. Find everything about this deliciously potent strain, including grow tips, effects, medicinal uses, and where to find Blueberry Kush seeds for sale. 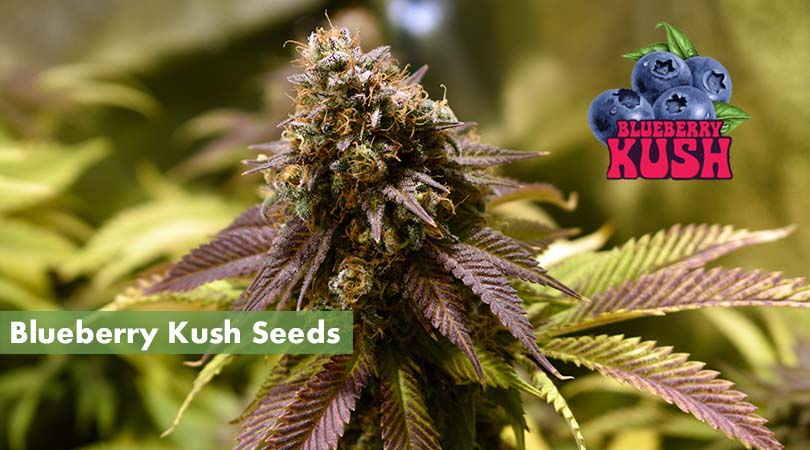 Blueberries have a deep association with pleasure, don’t they? Blueberry pie, blueberry muffins, blueberry tarts — this list isn’t making you hungry, is it?

Apart from being a critical ingredient in some of the world’s best desserts and baked goods, blueberries have also found their way into weed — sort of.

OK — the Blueberry Kush strain doesn’t actually have blueberries in it, but it tastes a hell of a lot like them. Moreover, just as blueberry desserts induce lip-smacking fits of pleasure, smoking Blueberry Kush is similarly indulgent.

A classic nightcap strain, Blueberry Kush is what you reach for when it’s time to roll the worries back with a hit of stress-relieving indica smoke.

Ready to delve into a world of exotic, earthy, and fruit-filled terpenes with one of the most unique — and popular — indica strains available today?

Then make sure to finish this top to bottom Blueberry Kush review. 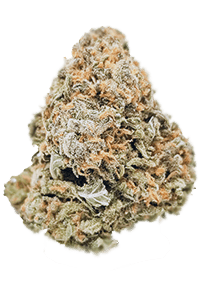 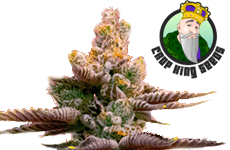 The recipe for creating Blueberry Kush goes back decades to the original Blueberry strain bred by DJ Short.

No, DJ Short isn’t a rapper with his own cannabis line. He’s a marijuana pioneer with decades in the game and a serious legacy behind him.

Back in the 1980s, Short was living in Oregon. At the time, the Reagan administration was exerting a hardline war on drugs, cannabis includes. So, Short discreetly grew indica and sativa plants in his closet.

He was looking for an indica with narcotic potency that still retained the mental euphoria and illuminating thought patterns created by sativas. To create his early hybrids, he saved buds from the best bags purchased from local dealers; then, he’d clone them.

After scratching the stems during the vegetative phase, Short discovered fresh aromas that indicated terpene and effects profiles for the upcoming flowers. Eventually, he found a strain with a sweet berry smell that later became Blueberry.

To say that Blueberry changed the cannabis industry is an understatement. The shift from thinking that the Earth was flat to realizing it was round is a more accurate comparison to Blueberry’s effect on marijuana culture.

People went wild for it because, well, no one had ever tried weed that smelled and tasted like actual fruit.

There’s just one problem with Blueberry. For some, it’s a little one-dimensional in terms of effects. It’s ultra-relaxing, but induces too much lethargy and not enough energy.

To remedy this while retaining the blueberry fruit terpenes of the original, an unknown breeder crossed DJ Short’s Blueberry strain with OG Kush. The result of crossing these two legendary hybrids was Blueberry Kush, which is often called Blueberry OG Kush.

Blueberry Kush is a best of both world’s strain — everything you love about fruity terpenes combined with OG Kush’s unbeatable relaxing euphoria.

Growing this strain yourself takes a little bit of effort. But, if you’re after exceptionally tasty nugs with crazy hues of purple, lavender, and even blue, then Blueberry Kush seeds are worth your best shot.

There are two main types of Blueberry Kush seeds:

With Blueberry Kush seed choices out of the way, let’s jump into the nitty-gritty of setting up your garden.

Blueberry Kush seeds are somewhat challenging to grow. Why? Because they are very picky about two things:

Find out how to nail these two variables for the best Blueberry Kush grow in the next section.

Both Blueberry and OG Kush are plants that thrive in warm, arid, Mediterranean climates.

As a result, Blueberry Kush seeds grow well in places like California, Oregon, and anywhere else with plenty of sunshine, low humidity, and long periods of warmth.

If you don’t live in a climate like the one mentioned, don’t worry. Blueberry Kush does amazingly indoors. Keep temperatures between 70°F and 82°F. Relative humidity should ideally stay at or below 45%, but during flowering, lowering that to <40% is even better.

Feed your Blueberry Kush plants heavily with nitrogen and a top-quality CalMag solution. However, if you overfeed them, you'll end up in nutrient lockout territory. Growing hydroponically is one way to solve this problem — another is to flush the medium.

If everything goes to plan, your Blueberry Kush plants will blaze through the flowering time in 6 to 9 weeks. Some phenotypes take up to 10 weeks, but they’re rare.

Indoor growers love Blueberry Kush for its medium compact stature that prefers to bush out rather than reach for the sky.

Plant your Blueberry Kush seeds to maximize canopy density. This will supercharge your harvest later — but, don’t neglect to promote airflow above and below the canopy.

Blueberry Kush seeds contain innate resistance to most pests and mold issues. However, poor air circulation can plague the dense cola sites with bud rot, so keep up airflow and RH vigilance.

The Appearance of Blueberry Kush Weed:

Have you ever seen pictures of ridiculously colorful, frosty weed online and figured they had to be photoshopped or filtered?

Once your Blueberry Kush flowers start peeking up after flipping to 12/12, get ready to turn the tables. You’ll soon be Instagramming your harvest with a #nofilter tag, only to have random folks accuse you of photoshopping.

Blueberry Kush nugs put out shocking displays of electric blue, highlighter purple, and mandarin orange. The effect on the eyes is hallucinatory — you almost feel like your nugs are under a blacklight due to the colors’ intensity.

That’s all without mentioning their velvety resin overcoat and plump density. In short, do your senses a favor and grow this exotic strain.

You’ll find the berry-sweetness of Blueberry Kush on your nose immediately after opening the bag. The unmistakable aroma of forest fruit is as delicious as the taste itself, which can only be described as earthy-berries.

Terpenes are responsible for these sensorial wonders, so let’s take a gander at them.

Just like eating a slice of homemade blueberry pie, hitting Blueberry Kush weed produces unmitigated pleasure and a massive smile on your face.

As the effects come on, you’ll notice your shoulders going lower as tension is literally erased from your muscles. Everything feels comfortable, your mind gets set at ease, and the day’s aches and pains fade away.

Blueberry Kush seeds have a long and illustrious history of helping medical patients manage pain, stress, and post-chemotherapy symptoms. Grow them in your garden to alleviate:

Smoking Blueberry Kush weed has a couple of well-documented negative effects. One is a dry mouth, and the other is dry, red eyes. However, these effects are common to most marijuana strains.