Looking for a heavyweight indica? Critical Kush is everything you're searching for, and more. Discover all the strain details, including grow tips, in this Critical Kush review. 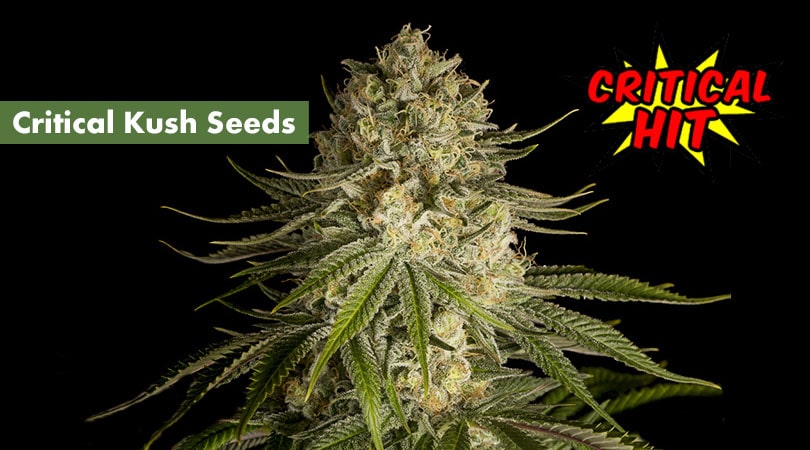 Today, many cannabis strains are being bred for qualities like fruity aroma, juicy flavor, and bag appeal. While exciting and new, sometimes you might be wondering what happened to good old fashioned hard-hitting weed.

Thankfully, it hasn’t gone anywhere, with strains like Critical Kush bringing in hammer-fisted pure indica potency. The most refreshing aspect of Critical Kush is the way breeder Barney’s Farm combined old-school genetics with today’s best breeding techniques, resulting in what you might call a super strain.

Critical Kush’s high THC concentration sends you from the launchpad clear into orbit in less than three hits, no matter your tolerance level. Worry not, your flight will be pleasant as the strain serves up out of this world lemon pie flavors combined with rocket fuel aromatics.

So, get yourself strapped in while this Critical Kush strain review covers everything you need to know, including how to get the most out of growing Critical Kush seeds. 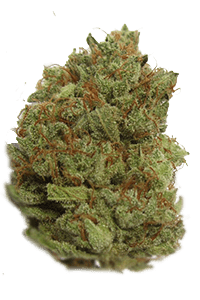 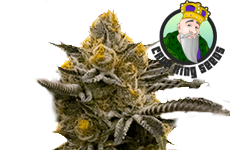 Critical Kush seems like a strain that’s been around forever, and in a way, it has. Descended from Critical Mass and OG Kush, Critical Kush contains landrace genetics from both Afghani and Hindu kushes deep within its lineage.

If you’re looking for a cheat sheet tip to understand cannabis history and strain types, remember this — anytime you see Afghani or Hindu anything, it’s going to be a deep indica. There are one or two exceptions to the rule, but this shortcut to understanding cannabis strain types is almost always guaranteed to work.

Now, who else but an intrepid Dutch stoner would have ventured into the Himalayas and back in the early 1980s just to discover cannabis seeds? None other than Derry of Barney’s Farm, a world-renowned seed bank at the marijuana cultivation forefront for nearly 30 years.

Barney’s Farm had already made tsunami-like waves upon release of Critical Mass, a balanced indica that won its fair share of cannabis cups throughout Europe. However, not content with resting on success, the breeders at Barney’s proved lightning does strike twice by pairing the blockbuster Critical Mass strain with an exceptional OG Kush phenotype.

The result is an indica that leans on your body with indica heft while endowing your mind with the uplifting euphoria OG Kush devotees know and love.

Some call Critical Kush buds the result of a match made in heaven, and few would disagree. However, indica-packed potency isn’t all that sets Critical Kush seeds apart. Just ask the judges who gave Critical Kush a medal at the recent Cannabis Cup in Michigan.

To discover why growers unanimously adore this strain (along with its monstrous yields), keep reading along for insider tips on growing Critical Kush seeds.

Critical Kush seeds were bred with a simple design goal in mind — maximize yield efficiency with the most compact and hardy plants possible.

To that end, Critical Kush is a resounding success. As a grower, strains like Critical Kush reinvigorate your love of marijuana cultivation, taking your appreciation to higher heights.

Today, there are two varieties of Critical Kush seeds available from Barney’s Farm. Which should you choose? Here are a few considerations to help you decide.

Critical Kush seeds are top performers both indoors and outdoors. They like organic soil mediums best but are also known to deliver outrageous yields when grown hydroponically.

If you go the hydro route, the key is delivering heavy nutrient feedings during the entire flowering period. Doing so encourages buds to pack on as much weight as possible, basically helping you to double down on an already stacked yield.

Ultimately, your grow’s success will come down to your ability to either control your indoor environment temperature and humidity levels or select an outdoor site that is suitable for Critical Kush’s preferences.

Maintain warm temperatures between 68°F and 85°, and don’t let relative humidity climb above 65%. Keeping humidity in check is crucial for Critical Kush — buds get so overgrown that, if allowed to retain excess moisture, bud rot is not a matter of if, but when.

Expect a short flowering time of 8-weeks when grown indoors. Outdoor growers can begin harvesting at the end of September or early October, depending on climate.

Critical Kush plants deliver truly legendary yields that will have you laughing all the way to the scale.

Indoors, expect up to 650 grams per square meter. Outdoors, each plant is capable of yielding between 650-700 grams per plant.

Owing to pure indica genetics, Critical Kush seeds grow into compact plants of low to medium height. Expect them to reach between 100-110cm, although a few phenotypes are known to give additional stretch.

Because of their relatively small stature, you can effectively bunch Critical Kush plants together as long as you maintain the canopy using SOG or SCROG techniques.

Critical Kush seeds are highly resistant to pests. However, bud mold is an issue when ventilation is not adequate, or when relative humidity levels are excessive.

The Appearance of Critical Kush Weed:

Critical Kush is one of the most beautiful strains on Earth, full stop. Everything you could ask for in a nug — density, weight, squish, frost — is all there in absurd quantities.

Bud shapes range from round to classic OG blunted spears covered in blizzard-levels of frost. Setting your grinder to work on a gram of perfectly cured Critical Kush reveals a texture that just begs to be rolled up.

Critical Kush is one of the most beautiful strains on Earth, full stop.

You’ll find the famous tangy jet fuel scent made famous by OG Kush along with a more subtle earthen spice on the nose. Flavor-wise, expect lemon-pine-hash that’s so thick you can chew it before exhaling.

The intermingling of three primary terpenes in Critical Kush seeds is responsible for its spectacular aroma and flavor profiles.

Worries, stress, and unconstructive thoughts simply fade away after the onset of Critical Kush’s extremely relaxing effects. As the static level drops, your calm mind and body’s positive signal rises, endowing you with a deep sense of goodness.

Physically, a Critical Kush high makes you feel a bit like an untethered astronaut floating in unexplored galactic space. The sedative effects come on heavy, adding weight to your spacesuit as you orbit the couch.

Whether you’re alone or in good company, a calm state of mind accompanies the body high, giving the object of your focus a spotlight effect that encourages mindfulness.

Growing Critical Kush seeds is an effective way to produce a replenishing medicine source that counters the effects of pain and stress. Use Critical Kush for:

Critical Kush is a very potent indica high. For this reason alone, start your session with one or two hits before progressing. Otherwise, you may feel dizzy and disoriented as the strain’s effects become too intense.