An informative guide on the monster-yielding Moby Dick strain. Learn everything about Moby Dick, such as its enormous harvest potential, growth traits, and where to find real Feminized Moby Dick seeds for sale online. 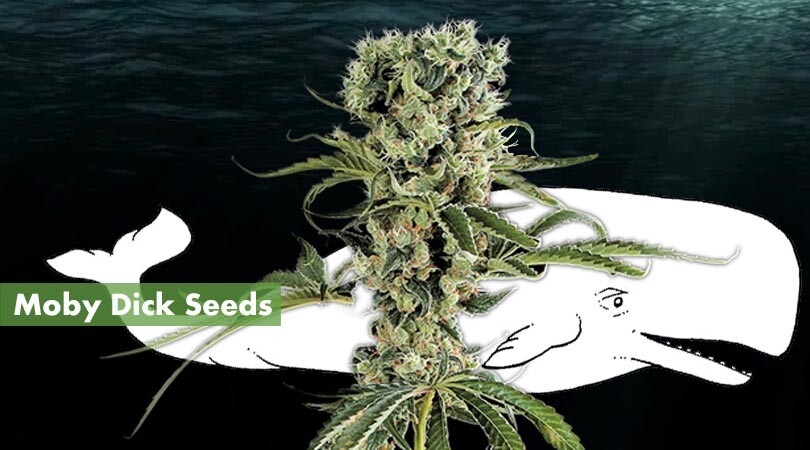 As a cannabis cultivator — you likely want monster yields of top-shelf buds. However, most marijuana strains offer medium to low amounts of weed come harvest time.

Luckily, we found one of the heaviest yielders to rule them all — Moby Dick.

Although there are a million and one puns associated with Moby Dick’s name — it’s clearly known for its ability to pump out ounces of potent weed. If you’re ready to break your personal harvest record this season — Moby Dick seeds are all you need.

Read below to discover everything there is to know about the Moby Dick strain. Soon, you’ll understand Moby Dick’s growth traits, cannabinoid content, and where to buy Feminized Moby Dick seeds online. 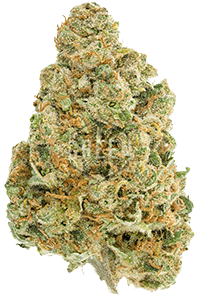 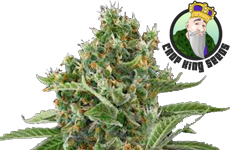 About the Moby Dick Strain

The Moby Dick strain was originally created by Dinafem Seeds — one of the industry’s most renowned groups of marijuana breeders.

The initial intention behind Moby Dick was the desire for a fast-flowering sativa-dominant hybrid. At the time, the cannabis industry was flooded with Haze-dominant sativas that took forever to flower.

Moby Dick seeds were created by crossing Haze and White Widow. For those in the know — Haze and WW are two of the most heavy-hitting weed strains around.

Since its release, the Moby Dick strain can be found in Feminized and autoflowering forms. If you’re ready to crank up your yield — Moby Dick is the strain to grow.

If you want to maximize your yield of Moby Dick buds — you must know what to expect during the growth cycle.

Knowing to provide extra nutrients during week seven, or understanding the best training method for a given strain, may prove to be the difference between a meager and substantial yield.

Therefore, we’ve provided all of the essential details of Moby Dick below. From grow difficulty to flowering time, you’ll discover tips on how to push your Moby Dick plants to the limit.

The Moby Dick strain is incredibly easy to grow.

Whether you’re a beginner or professional, Moby Dick provides cultivators with a stress-free grow. However, there are a few aspects that you must understand to ensure the best results possible.

First, Moby Dick plants enjoy a lot of nutrients. For those of you using an EC meter — 1.5-2.0 EC is the magic number for Moby Dick.

Lastly, due to their size when left untrained, it’s best to space each Moby Dick plant appropriately.

As you can see — these three tips are extremely easy to follow and will help your Moby Dick crop stack on the weight!

Overall, outdoor growers must focus on well-tilled soil that readily drains. In other words, loam-based soil with aerating amendments, such as perlite, is ideal.

As for indoor cultivators, Moby Dick enjoys a temperature range of 74-86F. Although the temperature can fluctuate above or below this range, 82F is the ideal temperature.

Additionally, indoor gardeners should allow 40-70% humidity during the flowering stage. Furthermore, due to the sheer size of Moby Dick’s buds — you’ll need ample ventilation to reduce the risk of mold.

Last but not least, indoor cultivators must provide their Moby Dick crop with at least 800-watts per m2.

Although 9-10-weeks is a long time to wait — the results are more than worth it. In other words, you’ll be swimming in weed in a relatively short amount of time.

In any case, indoor growers can expect to harvest Moby Dick by the end of the ninth week. Outdoor cultivators will likely harvest by the middle of October.

As long as you live in a climate that does not receive freezing temperatures during October — you’re clear to grow Moby Dick seeds.

The yield of the Moby Dick strain is the star of the show.

When grown indoors, cultivators can expect upwards of 650g/m2. When grown outdoors, Moby Dick plants can yield upwards of 1,500-grams per plant.

In other words — the Moby Dick strain produces serious weight.

Overall, Moby Dick plants can grow more than three meters. Therefore, you need to implement training methods to avoid a cannabis jungle in your grow tent.

The best training methods for the Moby Dick strain are LST, topping, ScrOG, or FIM. Although Sea of Green can be used, you’ll need to ensure an extremely short vegetative period.

On the other hand, outdoor growers can leverage large space by growing massive Moby Dick trees. At over 3-meters, Moby Dick plants will literally look like trees, thereby making them a sight to behold.

One of the best features of the Moby Dick strain is the fact that they are heavily resistant to common pests and diseases.

Although this may be music to your ears — never let your guard down. In other words, we suggest implementing an IPM program to ensure the safety of your Moby Dick crop.

The best practices to ensure the health of your Moby Dick plants are:

The Appearance of Moby Dick Weed

Although Moby Dick is known for its yield potential — it offers incredible bag appeal that anyone will be satisfied with.

As you glance at Moby Dick’s buds, you’ll quickly notice chunky and dense flowers that are loaded with resin. The calyxes are blown-out and provide incredible texture as you run your hand across the buds of Moby Dick.

Furthermore, each flower from Moby Dick is lime green, and the pistils are an electric orange. Overall, the flowers of Moby Dick look similar to its indica-dominant lineage — White Widow.

If you’ve been searching for bag appeal and yield — Moby Dick is a clear choice!

As you glance at Moby Dick’s buds, you’ll quickly notice chunky and dense flowers that are loaded with resin.

The dominant cannabinoid found in the Moby Dick strain is THC.

Furthermore, lab results show a high concentration of THCV, which is commonly found in sativa-dominant strains that receive abundant sunlight.

At this point, the Moby Dick strain must seem like the jack of all trades in the weed world.

Considering Moby Dick weed tastes and smells incredible — this assumption isn’t far from fact. The aroma of Moby Dick is wholly dependent on the phenotype.

The flavor of Moby Dick weed is similar to the aroma, and your taste buds will bask in sweet-pine-incense-bliss.

The three dominant terpenes found in the Moby Dick strain are myrcene, caryophyllene, and terpinolene.

Myrcene and caryophyllene provide sweet and spicy characteristics, while terpinolene offers fruity flavors and herbal accents. Overall, Moby Dick’s terpene composition is perfect for those who prefer the delicate balance between sweet and spicy weed.

Effects of the Moby Dick Strain

The effects of Moby Dick are extremely unique.

Immediately after indulging in Moby Dick, a rush of euphoria takes hold of your mind and body. Furthermore, a sense of increased energy channels throughout the limbs until your motivation levels are through the roof.

The effects of Moby Dick are ideal for wake and bake or when you require a pick-me-up. The sativa-dominant effects are extremely noticeable and borderline psychedelic.

As the effects wane after a few hours, the body will experience a sense of peaceful relaxation.

The breeders at Dinafem have carried out many studies and show that Moby Dick is perfect for many medical issues. Although sativas are not commonly known as the best medical marijuana strains — Moby Dick has a lot to offer.

Here’s a list of the major medical attributes that Moby Dick can assist with:

As you can see, Moby Dick is extremely uplifting and works wonders for post-chemo patients that lose their appetite. Overall, medical marijuana patients that require an energetic marijuana strain should grow Feminized Moby Dick seeds at home.

With so many positive attributes, it only makes sense that there are a few adverse effects while indulging in Moby Dick.

If you consume too much Moby Dick weed — you may experience:

Additionally, if you’re new to cannabis — take it easy with Moby Dick. The THC content is high, making the Moby Dick strain a one-hit-quit for most newbies.

Therefore, always gauge your tolerance and adjust your intake accordingly for an enjoyable time with Moby Dick.