An in-depth review of the colorful Rainbow Kush strain. Learn everything there is to know about Rainbow Kush, such as cultivation tips, effects, and where to find Rainbow Kush seeds online. 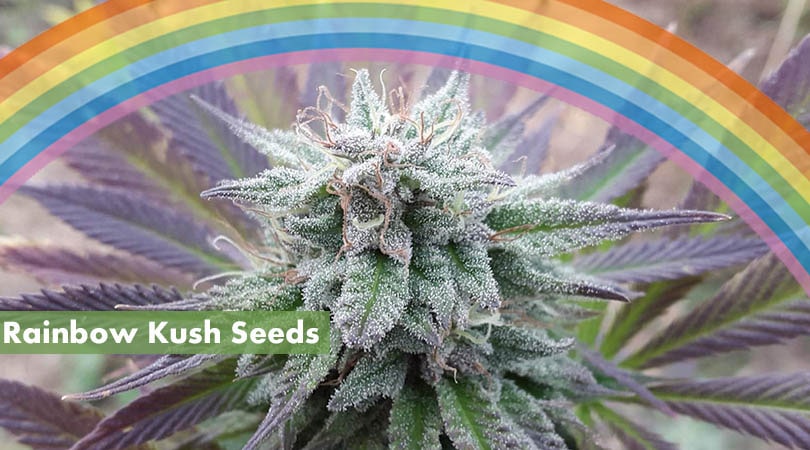 As you browse an online catalog of cannabis seeds, it’s easy to lose your way among the countless varieties. Where do you start as you shuffle through indicas, sativas, and hybrids? Unless you’re after something specific, a hybrid is your best bet.

If you think finding a high-quality hybrid is as tricky as finding a pot of gold — think again.

Rainbow Kush is a literal pot-of-gold that’s filled with enough treasure to make your head spin. Rainbow Kush offers something that most strains don’t — a myriad of colors and effects that are perfect for day or night.

If you’re ready to find what’s at the end of the rainbow, it’s time to grow Rainbow Kush seeds. Read along to learn everything about the Rainbow weed strain, including growing tips, medicinal use, and where to find Rainbow Kush seeds for sale. 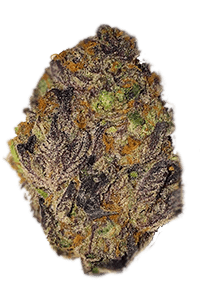 Lifetime Seeds creates cannabis strains that represent symbols and elements in nature. In the case of Rainbow Kush, Lifetime Seeds wanted a strain that delivers colorful buds and harmonious effects. Lifetime Seeds achieved their goal by crossing sativa-dominant Dancehall with the indica-dominant Blueberry.

The characteristics within Rainbow Kush seeds are undeniably hybrid. Each Rainbow Kush seed delivers an even number of indica and sativa traits that delight the eyes, palate, mind, and body.

Ever since its release, cannabis cultivators worldwide scramble to grow the rainbow-colored buds of Rainbow Kush. Furthermore, Rainbow Kush has a following on Instagram, where users post oversaturated and filter-blasted photos of Rainbow Kush weed.

First, Rainbow Kush is a fast-flowering hybrid, which means you can use small to medium-sized pots. Remember, the smaller the containers, the more plants you can fit into a square meter indoors. If you grow Rainbow Kush seeds outdoors, allow one to two meters between each plot.

Due to Rainbow Kush’s growth characteristics, it’s best to grow Rainbow Kush plants in the SOG method. Remember, the goal is the apical flower, so cram as many plants as possible without leaf contact.

If you use the Sea of Green technique, you’ll have a bountiful harvest of rainbow-drenched buds in no time.

Rainbow Kush is one of the easiest cannabis strains to grow.

Whether you’re a beginner or a professional cultivator, Rainbow Kush will light up your garden with resin-coated buds in a snap. Overall, Rainbow Kush doesn’t make you search endlessly for its pot-of-gold. As long as you give it a bit of TLC, Rainbow Kush does all the heavy lifting.

Rainbow Kush excels in both colder and Mediterranean climates. However, Rainbow Kush plants need low temperatures to express the colorful buds that it’s known for.

The optimal temperature range is between 62-82°F. Furthermore, the ideal humidity spectrum is between 40-45%. If you want a sea of purple, green, and orange, ensure a temperature at the low end of the spectrum.

If you have to ask — yes, it’s a fast flowering strain. Rainbow Kush is one of those strains that finish before your drying room is set up.

The yield of Rainbow Kush is incredibly generous.

The height of Rainbow Kush is one of its best characteristics. Not only are Rainbow Kush plants short, but they also grow vertically without much lateral growth. In other words, Rainbow Kush was bred for the Sea of Green method.

If you grow Rainbow Kush seeds indoors, allow a minimum of 15-days of vegetation before switching to 12/12.

The Rainbow Kush strain is highly resistant to common pests and diseases.

Due to this beneficial trait, many cultivators in the colder climates of the USA and the UK prefer Rainbow Kush seeds. However, you must follow these helpful tips to ensure a pest and disease-free garden.

The Appearance of Rainbow Kush Weed:

You won’t believe your eyes as you pull out a bud of Rainbow Kush from the curing jar.

The buds of Rainbow Kush present dense flowers that feature spires of calyxes at every corner. The buds are OG-esque but feature the density of Kush varieties.

The color of the calyxes is the real showstopper as you gaze at Rainbow Kush’s marvelous buds. The flowers contain a myriad of colors, such as lavender, light and dark green, and vibrant orange pistils that glow against the backdrop.

To add a cherry-on-top, Rainbow Kush contains an abundance of resin across the surface. If you want boutique-grade weed that will make anyone look twice — Rainbow Kush is it.

The flowers contain a myriad of colors, such as lavender, light and dark green, and vibrant orange pistils that glow against the backdrop.

The dominant cannabinoid in Rainbow Kush seeds is THC.

According to lab results, Rainbow Kush weed offers between 17-22% THC. However, lab results also show that Rainbow Kush buds may contain up to 1% CBD. Although 1% is meager, it does add to the therapeutic potential of Rainbow Kush.

What did they mean when they said, “unlock the rainbow?”

You’ll understand what it means once you open a jar of Rainbow Kush weed. As you inhale, you’ll notice a bright and pungent aroma of wild berries, tropical fruit, and exotic incense. The taste is equally unique and features fruity, spicy, and sweet flavors that’ll make you lick your lips.

The three dominant terpenes in Rainbow Kush seeds are:

Whether you consume the Rainbow strain in the morning or the middle of the night — the effects are beyond pleasant.

As you blow a cloud of Rainbow Kush smoke, a sudden burst of euphoria encompasses the mind. As your mood increases — so does the relaxation throughout the body. Each puff of Rainbow Kush weeds provides a tidal wave of bliss that washes away all of your worries.

If you need a time out, Rainbow Kush weed is unlike any other cannabis strain. It’s because of these hybrid effects that Rainbow Kush seeds sell out — fast.

The medical marijuana community is all about Rainbow Kush weed. The therapeutic properties of Rainbow Kush buds are through-the-roof, which is why medical patients in the USA and the UK prefer Rainbow Kush seeds.

As long as you have Rainbow Kush plants, you’ll never worry about an empty medicine jar. Here’s a list of issues that Rainbow Kush bud can assist with.

Although Rainbow Kush is one of the most pleasant strains around, there are a few adverse effects.

First, Rainbow Kush stimulates the appetite, and in layman’s terms, it gives you a serious case of the munchies. If you want to avoid additional calories, you should start slow with Rainbow Kush weed.

Furthermore, Rainbow Kush weed produces cottonmouth and blood-shot eyes. Aside from these adverse issues, Rainbow Kush is a near-perfect hybrid that will lighten anyone’s mood.

I’m glad I read this. I’m growing a girl now she likes to show off her colors. I see the height is three feet witch the way I grow she’s now better than 6feet tall an 6to8 feet around. She’s been flowering for a week and so heavy with leaf I trimmed what seemed a hour an still need to trim more. Some may say don’t trim some say trim I say if it’s taking the light from somewhere it’s needed trim them. I went into to it blind on this strain I liked it’s colors so I didn’t even… Read more »