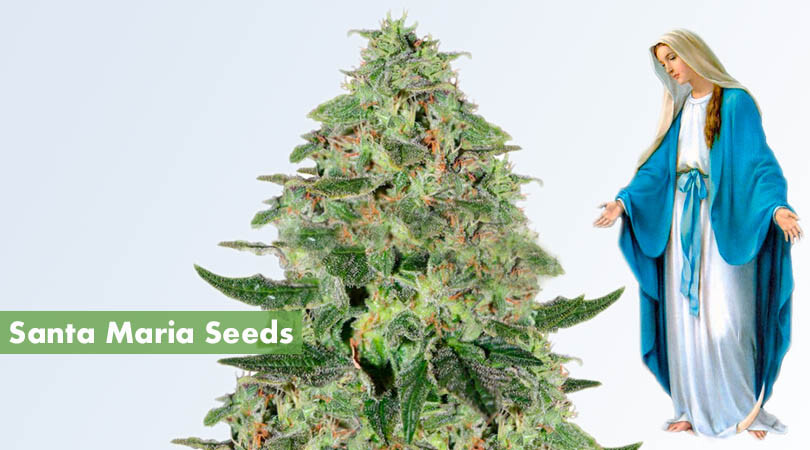 If you’re ready to embark on a spiritual journey — it’s time to learn about the Santa Maria strain.

From the Brazilian Amazon to your pipe, Santa Maria has traveled the distance to become one of the most legendary strains in the cannabis industry. From its sativa-dominant effects to fast flowering potential — Santa Maria weed is all you need for hours of uplifting effects.

Read along as we detail the Santa Maria strain. Soon, you’ll understand how to grow this landrace beauty and find where to buy autoflowering Santa Maria seeds. 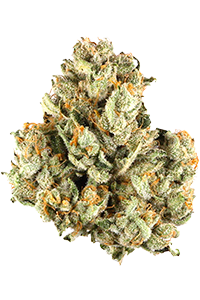 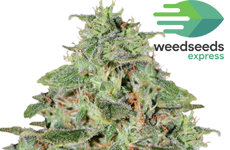 The History of the Santa Maria Strain

The Santa Maria strain has an extensive history.

Although we’d love to get in-depth regarding the origin story, we only have time for a tl;dr summary. Before we begin, grab a bag of popcorn and get comfortable — this is one of the most strange weed stories you’ve ever read.

As the story goes, rumors of a holy grail strain that originated in the Amazon made rounds in the cannabis industry. From mind-blowing euphoria to extreme sensual arousal — Santa Maria immediately perked the cannabis scene’s interest.

Allegedly, the editor of High Times (Bernt Gundersen) managed to track down a Brazilian sect that held the prized Santa Maria strain. As SpeesCees from No Mercy Seeds described it, Bernt stole roughly seven Santa Maria clones from a Brazilian sect. It’s unclear whether this Brazilian sect was based in Brazil or in the United States.

In any case, Bernt imported the seven clones to SpeesCees in the Netherlands. Although SpeesCees was mad about the theft, they felt a sense of justice considering the sect was known for a wide array of crimes.

As such, SpeesCees felt his cosmic karma lifted and proceeded to create official Santa Maria seeds. Prior to this, Santa Maria was only available in clone form.

Since then, Santa Maria’s name has been interchangeable with Planck. The reason behind the name change is that Santa Maria was used for spiritual purposes.

Thus, Planck has since won countless cannabis awards due to its stellar traits. Now, you can find Planck seeds in both feminized and autoflowering forms.

How to Grow Santa Maria Seeds

Next, let’s discuss how to grow Santa Maria plants.

From optimal growing conditions to flowering time, there’s a lot to understand before sprouting your new Santa Maria seeds. Below, you’ll find relevant sections to assist your upcoming Planck grow.

Santa Maria is one of the easiest strains to grow indoors or outdoors.

No Mercy Seeds created eight generations of Santa Maria seeds — thus enhancing its overall stability. Therefore, beginners and professionals will find it easy to manage plants in each seed pack.

According to No Mercy Seeds, the Planck strain thrives in moderate climates.

Thanks to its rapid flowering time, Santa Maria can handle much of what the great outdoors throws its way. However, early-season frost is something all outdoor growers must avoid.

Indoors, Santa Maria plants thrive in optimal conditions, such as:

The Santa Maria strain is a fast-flowering sativa-dominant hybrid.

If you land the feminized version, you may harvest within 7-8-weeks. Alternatively, autoflowering Santa Maria plants may finish within 12-weeks from germination.

The yield of Santa Maria is stellar, thanks to its genetic pedigree.

Indoors, the Planck strain may produce up to 550-grams per meter squared. Outdoors, Santa Maria may yield upwards of 600-grams per plant.

Santa Maria plants may grow to medium sizes, such as 80-120cm.

Ultimately, Santa Maria plants are relatively easy to grow indoors, thanks to their medium height. You can always top your Santa Maria crop if you find yourself limited in space.

Additionally, LST and ScrOG are tried and true techniques to tame your Santa Maria plants.

Considering Santa Maria originated in the Amazon — it has moderate fungal resistance.

Therefore, you must incorporate a few different methods to deter pests and diseases from attacking your crop. Below, we’ll provide a few techniques to stop outbreaks in their tracks:

From slender buds to gorgeous foxtails, Santa Maria weed is unlike anything you’ve ever seen. In other words, Santa Maria carries its landrace lineage well and stands tall when placed next to modern-day cannabis strains.

According to lab results, Santa Maria weed ranges between 12-14% THC.

Although it seems low, Santa Maria provides long-lasting effects. In other words — do not underestimate the THC content within Santa Maria weed.

With every puff or whiff, Santa Maria weed exhibits a distinct terpene profile that uplifts the senses.

Both the aroma and flavor produce ample floral, fruity, and earthy tones. Ultimately, Santa Maria weed smells and tastes like weed before it became colonized by the cannabis industry.

The recreational effects of Santa Maria are incredibly diverse.

However, there are two notable effects that Santa Maria weed is known for:

Additional effects are creativity, motivation, and a general sense of energy. However, users are known to experience a deep-rooted sense of arousal and happiness.

Thus, Santa Maria marijuana is ideal when shared with your significant other in a romantic setting.

Santa Maria contains an abundance of medical potential. That’s why many people seek out autoflower Santa Maria seeds to grow their own supply.

Below, you’ll find a wide array of medical issues that Santa Maria weed may assist:

As with all marijuana strains, Santa Maria may produce unwanted effects, such as:

As you can see, you must exercise caution when consuming Santa Maria weed.