Feel the force with Skywalker OG, one of the most relaxing cannabis strains in the galaxy. This Skywalker OG review details the strain's recreational and medicinal effects, grow tips, and where to buy Skywalker OG seeds online. 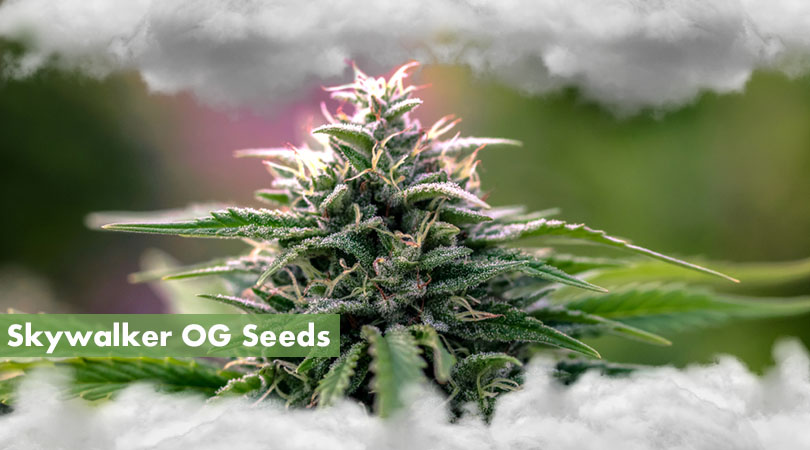 In a galaxy far, far away, cannabis strains have become increasingly hybridized, complex, and distant from their pure, landrace roots.

Actually, it’s in this galaxy that heirloom characteristics of cannabis strains are being lost. While creating unique hybrids results in spectacular flavors, exotic aesthetics, and hilarious names, there is something to be said for the loss of strain origins.

The Skywalker OG strain is a hybrid, to be sure. However, it’s a hybrid that traces its lineage directly to supreme heirloom strains that may as well have descended from the Jedis themselves.

Skywalker OG is everything you want an indica to be — powerfully relaxing, spiritually uplifting, and physically relieving. With every puff of Skywalker OG, a tangible feeling of peace is perceptible and keeps the Dark Side of the force at bay.

Growing Skywalker OG seeds is just as rewarding because this plant bears serious amounts of fruit for growers of all skill levels.

Want to grow your own Skywalker OG seeds? Keep reading to find out how — you’ll also discover everything you need to know about this strain’s history, effects, and exceptional aroma. 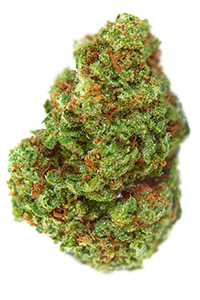 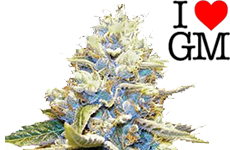 If you’ve ever wondered why Yoda talks the way he does and always looks so baked, it’s because, without a doubt, he’s puffing on Skywalker OG.

This heavy indica-dominant strain is sage in its effects, giving you the 1,000-yard stare of someone who knows the secrets of the universe.

With wisdom-bearing effects and amazing harvests in the grow room, the first place to look if you want to know why Skywalker OG is so bomb is its lineage data.

Skywalker OG seeds descend from a cross of Skywalker (Mazar x Blueberry) and the indomitable OG Kush. Mazar, short for Mazar I Sharif, is a narcotically-potent landrace indica from Afghanistan. In fact, the name Mazar is taken directly from the region from which the strain hails.

Mazar is known for bearing legendarily high yields, snowdrift dustings of trichomes on the flowers, and out of body relaxation that verges on being too strong.

Today, tracking down Mazar is a pretty tough ask. Landrace strains have increasingly disappeared as original genetics are diluted into extinction by the over-production of hybrid strains.

On the flip side of the cross, Blueberry is remarkably similar to Mazar. Back in the 1970s, master grower DJ Short experimented with Thai landrace strains, resulting in an incredibly exotic cut of purple weed that could have originated on Endor.

The OG in Skywalker OG comes from — you guessed it — an OG Kush variety. The addition of OG Kush to Skywalker quite literally throws fuel on the fire, as OG Kush’s lemony rocket fuel terpenes are evident in these nugs.

After years of being a clone-only strain, Reserva Privada went ahead and acquired Skywalker OG, making it possible for people to buy Skywalker OG seeds.

Growing Skywalker OG is immensely rewarding, but before harvesting scale-busting yields, you need to choose which route to go on seeds.

Making your choice between Skywalker OG seeds is the easy part. Now, it’s time to make the magic happen by letting water, soil, and light bring your flowers to fruition.

Skywalker OG seeds have two sides — Jedi and Sith. The Jedi side (Mazar x Blueberry) is audaciously simple to grow. The Sith side (OG Kush) is tricky, needy, and finicky.

As a result, growing Skywalker OG seeds is medium-difficult indoors, but fairly easy and straightforward outdoors.

Skywalker OG seeds are rooted in landrace strains on one side, endowing the strain with tough genetics descended from hot Afghan summers and tropical Thai forests.

It’s OG side tempers things by giving the strain a preference for warmth without much humidity, meaning Skywalker OG thrives in a Mediterannean outdoor climate between 65°F and 82°F.

The short turnaround for harvests makes this plant the perfect choice for pulling down several harvests per year.

Skywalker OG plants reach for the sky with vigor, probably because of their Thai genetics. This makes them medium to tall in height, depending on the phenotype.

The Skywalker OG strain, sometimes called Skywalker Kush, is resistant to most forms of pests and mold.

However, the flower’s dense bud structure makes it susceptible to bud rot if ventilation is poor.

The Appearance of Skywalker OG Weed:

If you’re high enough, Skywalker OG nugs look a lot like Yoda. They’re limeish-green, dense, and wrinkled with frosty leaves that, if you stare long enough, mimic the feeling of looking deep into a starry night sky.

Before you drift too far into space, Skywalker Kush’s unmistakable sweet and sour lemon drop aroma will jolt you back to your senses, as will the floral spice taste of its smooth smoke.

If you’re high enough, Skywalker OG nugs look a lot like Yoda. They’re limeish-green, dense, and wrinkled with frosty leaves that, if you stare long enough, mimic the feeling of looking deep into a starry night sky.

Skywalker OG seeds contain a complex terpene profile that helps to make this strain a sensorial and medical juggernaut.

At 85% indica-dominance, Skywalker OG cannabis is a pure nighttime strain. At the onset, you’ll feel a blast of euphoria with a slight headband effect before the high settles into the body and stays there.

The full body-relaxing intensity of Skywalker OG makes you feel as though, with one more hit, you might finally leave your physical form altogether and teleport through time and space.

While some describe the high as narcotic in strength, there is a mildly psychoactive side that makes it a lot of fun to listen to music with your eyes closed.

Skywalker OG is perfect for those looking for an almost purely physical high that takes your mind out of the equation.

The couchlock effects are strong with this one, so dose carefully.

You can expect the usual negative effects of smoking potent weed, like dry mouth and dry eyes. You should also prepare to be incredibly lazy and unmotivated after smoking Skywalker OG.

Strains of the Month
June 2021