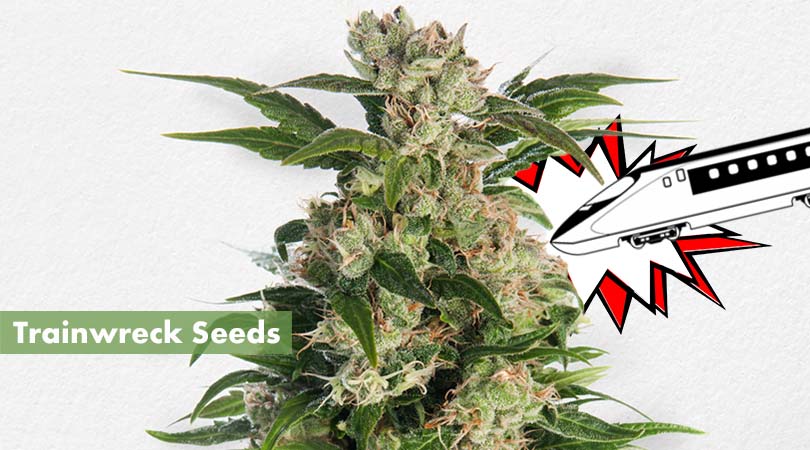 Raise your hand if you’ve smoked Trainwreck. Alright, it looks like many of you have, especially those who’ve been partaking in cannabis for a while.

For those of you who haven’t hit a bowl packed with the legendary Trainwreck strain, let this come as an unambiguous recommendation: do it.

Trainwreck is a gloriously potent sativa hybrid that has, more or less, become a standard daytime strain everyone should try at least once. It boasts soaring cerebral effects that dial you into reality while keeping your imagination limber enough for creativity.

Moreover, with potency levels that reach well into the stratosphere’s upper reaches, Trainwreck delivers focus, energy, and beaming euphoria to your daily grind.

Want one more reason to love this strain? Trainwreck seeds make an awesome addition to your garden regardless of skill level.

Dig into this Trainwreck review for details on growing ultra frosty yields of this fan-favorite sativa. 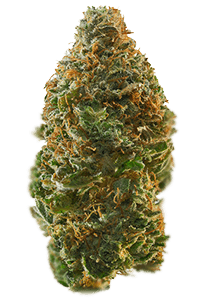 The Best Trainwreck Feminized Seeds in 2023: 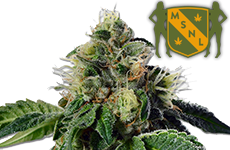 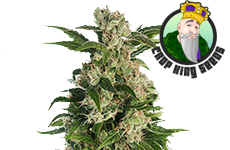 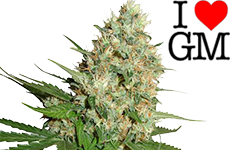 A strain with a name like Trainwreck surely has a fascinating history, right? Like many cannabis strains with roots going back to the 1970s and 80s, Trainwreck seeds originated from a mystery.

There are clues for the intrepid detective hoping to piece together a picture that might latch onto the real story. Trainwreck is a sativa-dominant hybrid with not two but three landrace strains in its lineage.

On the sativa side are Thai and Mexican landraces with native origins in both of those faraway lands. Old school stoners know Mexican and Thai landrace sativas for their bafflingly high potency and laser-like energetic effects.

Trainwreck seeds have an indica side as well, with Afghani, a landrace variety from Afghanistan, coming into the mix. The Afghani legacy is such that many of today’s vital strains use it as a backbone, Trainwreck included.

For the detective, an intermingling of three landrace strains signals that Trainwreck is itself the result of a relatively old collision of plant genetics, perhaps going as far back as the 1960s.

The legend is that a pair of brothers were growing a patch of plants near train tracks in Northern California’s Emerald Triangle when a trainwreck happened nearby. Rather than get caught with the then-illegal plants, the brothers picked up a few seedlings and fled.

One of those seedlings turned out to be a keeper, which they named (you guessed it) — Trainwreck. Regardless of whether that story holds water or not, the fact is, Trainwreck is here now, and it’s an incredible smoke.

With numerous High Times Cannabis Cup wins, acclaim as one of the greatest strains in history, and a fat yield with minimal effort in the grow room, Trainwreck is a mind-blowing plant.

Next, let’s delve into the best tips for growing Trainwreck seeds, along with effects you can expect from your cured nugs.

Trainwreck seeds are plentiful and authentic when you find the right place to buy them. That’s because, over time, breeders have done an excellent job of stabilizing the strain’s genetics, resulting in more consistent plant characteristics for growers.

Why should you grow Trainwreck seeds? The reasons are simple enough. This strain provides show-stopping nugs with arctic amounts of frost in just a matter of weeks while being very flexible temperature-wise.

The fact that Trainwreck thrives in diverse conditions makes it the right strain for a majority of growers who don’t live in perfect Mediterranean year-round warmth. Additionally, Trainwreck seeds are super forgiving of many of the mistakes you’ll make as a novice cultivator.

Once your packet loaded with Trainwreck seeds arrives, it’s time to get them in the ground.

Trainwreck seeds are pretty easy to grow for novices and very easy for experienced growers.

There’s no need to overcomplicate the situation when growing Trainwreck seeds. Because of their genetics rooted in landrace strains, expect a robust plant that can handle changes in temperatures and less than ideal conditions.

To start, plant them in organic soil with plenty of nutrient-rich amendments like compost tea. Doing so mimics the delivery of nutrients in natural environments where animal droppings, fallen leaves, and other organic matter break down and provide plants with food.

Temperature-wise, stay in a warm range between 68°F and 85°F while keeping relative humidity below 65%. During flowering, drop RH even lower to an average below 45%, and ensure airflow coverage.

Trainwreck is a fast finishing strain with an average flowering time of about eight weeks. Some phenotypes are known to wrap up even faster, making Trainwreck seeds a solid choice for multiple harvests per season.

Trainwreck plants are super vigorous, resulting in immense bud production. Indoors, plants can lay on up to 550 grams per square meter. Outdoor-grown Trainwreck plants yield 700 grams or more per plant — it all depends on how much you let them bush out.

Outdoor growers will cherish the large, wild bushes that result from growing Trainwreck seeds. Indoor growers will need to get their best scissors out for constant topping, pruning, and canopy control.

Suffice to say, Trainwreck plants generally get pretty big both vertically and horizontally. Don’t let that intimidate you — just be prepared by giving plants adequate spacing and overhead clearance.

With robust landrace strain genetics contained within, Trainwreck seeds do well against pests and mold.

The Appearance of Trainwreck Weed:

Have you ever held a freshly harvested cola from a vigorous sativa plant? Doing so is one of life’s real pleasures. Imagine a nug the size of a soda can, frost and all, just shining between your hands.

Trainwreck is one of the few strains delivering gigantic buds with the frost and fire to match. In true sativa fashion, buds grow like healthy coniferous trees. Except these trees are decorated for the holidays with resplendent trichomes drenching every available nanometer of green space.

Trainwreck is one of the few strains delivering gigantic buds with the frost and fire to match. In true sativa fashion, buds grow like healthy coniferous trees.

Trainwreck is a high THC strain boasting upwards of 15% THC on average. Some phenotypes test in the lower 20% THC range — novice smokers should proceed with caution.

With the proliferation of OG Kush hybrids, it’s not every day that you find as rare a mixture of terpenes as are present in Trainwreck seeds. On the nose you’ll find sweet composted earth akin to fruit that’s slightly past its prime.

Flavor-wise, Trainwreck boasts an old-school-cool hashy soil with just a hint of dark amber maple syrup. Where do these flavors and effects originate from? Why, Trainwreck’s terpenes, of course.

Laser-focused. Dialed-in. Totally in the zone.

These are just a few of the effects of ripping a bong load of well-cured Trainwreck weed. However, you won’t experience only the energetic upside of sativa, which is where Trainwreck gets really interesting.

Its Afghani parent throws a wildcard into the mix, giving you the relaxing, pain-numbing qualities of an indica paired with mental and energetic uplift.

The result? An excellent balance between having the gusto to get things done, be creative, and socialize, while retaining the amazing body feels and relaxed vibe specific to indica.

Trainwreck seeds have long been grown as daytime medicine for users seeking relief from:

For some, Trainwreck’s effects come on too strong owing to the strain’s high THC levels. To ensure a safe flight, smoke smaller amounts to start, and gradually build up over time.

The Best Trainwreck Feminized Seeds in 2023: