CBD can do a lot - but it can’t get you high. Let’s look at why CBD keeps you so clear-headed and calm.
Learn Leave a comment
Guy Sherman 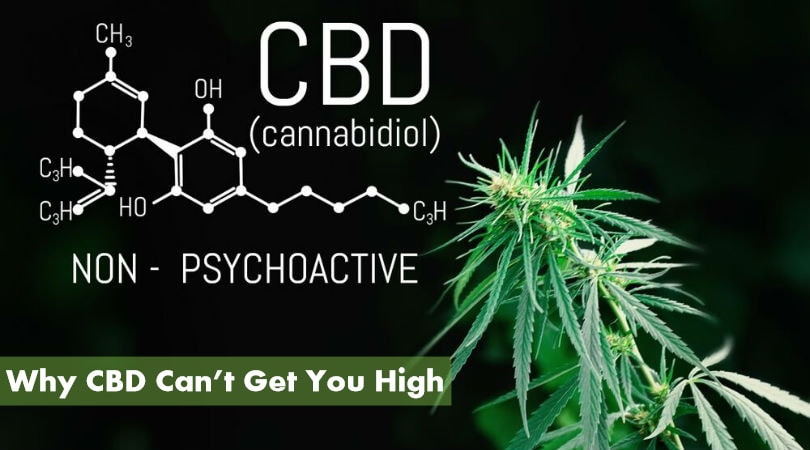 It’s easy to see why cannabidiol, better known as CBD, has attracted so much attention in recent years. CBD users are finding significant relief from everything from anxiety to sore muscles. Despite being touted as safe for nearly anyone to use – even kids and pets – the simple fact that CBD originates from the marijuana plant tends to inspire concerns over whether CBD could still get you high.

Can CBD get you high?

The answer is no, CBD cannot get you high. CBD has many effects on the brain – likely including some that haven’t even been discovered yet – but getting you high is not one of them. In fact, higher doses of CBD may actually reduce the intensity and potential adverse effects of a marijuana high.

Does that mean CBD oil is totally safe?

If your CBD oil, edibles, sprays, creams, or other products are cannabis-derived, they may include trace amounts of THC. This means that some products labeled as “CBD” may have the potential to cause psychoactive reactions. However, hemp-derived CBD products will not get you high at all. Hemp is a cannabis strain that is cultivated for industrial use (common uses include textiles, rope, paper, fuel, and food) and is specifically bred to be non-psychoactive. Hemp-derived CBD oil with less than .3 percent THC is legal in all 50 U.S. states.

Hemp-derived CBD products will not get you high at all.

CBD and THC are both “cannabinoids,” a type of chemical compound produced by the marijuana plant. Of the 66 known cannabinoids in weed, CBD appears to be the most abundant.

Research on the endocannabinoid system is still in its infancy, as its existence was only just discovered in the 1990s. But we do know that the endocannabinoid system is one of the most important systems of the body. It’s responsible for regulating memory, mood, sensitivity to pain, appetite, sleep cycles, immune function, digestion, reproduction, and a number of other essential functions. And this doesn’t just apply to humans! All vertebrates, both warm and cold-blooded, produce their own cannabinoids.

How does the endocannabinoid system work?

Cannabinoids are processed at “receptor” sites throughout the body (in the brain, central nervous system, immune cells, fat, bone, skin, and gastrointestinal tract, among many other organs and body systems). These receptors’ function is to receive information and release neurotransmitters – chemical substances that deliver that information to your cells. Substances, such as cannabinoids, that bind with receptors to relay these messages are called agonists. Each type of receptor only has certain types of agonists that can effectively bind to it.

What causes a marijuana high?

THC (tetrahydrocannabinol), a psychoactive cannabinoid found in marijuana, is an effective agonist to both CB1 and CB2 receptors. THC enhances CB2’s anti-inflammatory properties, which may inspire feelings of relaxation and well-being. But it’s what happens when THC binds to CB1 receptors that actually gets you high.

Because CB1 receptors affect a myriad of brain and body functions, your whole system gets thrown off-balance when THC is introduced. The results can vary widely, considering factors such as dose size, your personal “tolerance” for THC, and even your headspace prior to using it. This CB1-THC connection affects balance and coordination, decision-making skills, reaction time, memory function, and ability to focus. This connection also prompts the brain to release higher levels of dopamine and anandamide, feel-good hormones that are released in response to pleasure. This is what’s chemically behind the euphoric feelings of being high.

Why doesn’t CBD get you high?

CBD, on the other hand, can barely bind to CB1 and CB2 receptors at all. CBD alters the shape of CB1 receptors as it attempts to bind to them, which impedes other cannabinoids’ (particularly THC’s) ability to connect with these receptors. CBD’s relaxing effects on the brain and body are not actually caused by it binding to receptors at all.

What CBD does is inhibit the release of an enzyme known as FAAH (fatty acid amide hydrolase). FAAH breaks down anandamide, nicknamed the “bliss hormone,” when it’s released. When FAAH enzymes are blocked, anandamide builds up in the brain instead of being quickly broken down, prompting an enhanced state of relaxation and well-being.

Q: Why does CBD not cause a high?
A: Unlike THC, CBD lacks the ability to bind to CB1 receptors, which regulate a wide variety of bodily functions and systems. When THC binds to CB1 receptors, these body systems are thrown off-balance, prompting the physical, mental and emotional symptoms of a cannabis high.

How CBD interacts with THC

At a molecular level, CBD and THC are remarkably similar. They are both comprised of the exact same atoms: 21 carbon atoms, 30 hydrogen atoms, and 2 oxygen atoms. This molecular formula is known as C21H30O2. The molecular structure appears only slightly different to the eye (CBD contains a hydroxyl group where THC’s atoms form a cyclic ring), but this difference accounts for two substances with very different effects.

At a molecular level, CBD and THC are remarkably similar.

CBD has the unique ability to temper the effects of THC. CBD’s largely ineffective attempts to bind to CB1 receptors reduce some of the potential intensity and adverse effects of THC, including anxiety and paranoia. CBD and THC are both biphasic, which means that low doses and high doses may cause opposite effects. CBD and THC also play off of each other differently depending on the ratio between them in a particular strain.

Strains of weed that are high in THC are naturally lower in CBD and vice-versa. A 1:1 CBD to THC ratio tends to be the “sweet spot” for a majority of cannabis users. However, some people who want only a very mellow high or who experience anxiety, paranoia, or panic attacks while using weed will benefit from strains with even higher levels of CBD. Taking additional CBD prior to using cannabis is another strategy that some find effective for keeping THC’s unpleasant side effects at bay.

Examples of CBD and THC working with (or against) each other

Lower doses of CBD are known to enhance the positive effects of THC (such as pain relief). However, it is possible for a small dose of CBD to increase the effects of marijuana intoxication, particularly in those who rarely use weed.

High doses of CBD are known to soothe the negative side effects of THC (such as anxiety and paranoia). Current research suggests that high doses of CBD might reduce symptoms of and protect the brain from some of the detrimental effects of long-term THC use, such as psychosis, memory recall problems, and impaired cognition.

CBD and THC both bind to glycine receptors (GlyRs) in the brain and spinal cord, which has been shown in animal studies to have a potent analgesic (pain-relieving) effect. Preliminary research suggests that these two cannabinoids working together could provide significant relief from chronic pain and inflammation.

Q: Does CBD kill your high?
A: High doses of CBD have been shown to “mellow-out” euphoria (the feel-good sensation of being high). The psychotropic effects of THC may be greatly reduced when a large dose of CBD is taken first, but this will vary from person to person.

THC and CBD working together could provide significant relief from chronic pain and inflammation.

Weed and the “entourage effect”

The synergistic relationships between different chemical compounds in marijuana are part of what’s known as the “entourage effect.” It is believed that the multitude of chemical compounds in the marijuana plant have greater effects when used as a whole than an individual cannabinoid would on its own. CBD’s ability to calm the negative side effects of THC is an example. Still other chemicals in weed may contribute to this effect, and/or enhance or inhibit any of the other potential effects of marijuana. Researchers have barely scratched the surface of understanding the many complex relationships between cannabinoids and other chemicals, such as terpenes. So far, most marijuana research has only looked at isolated cannabinoids, particularly THC.

Q: Can CBD make your high better?
A: In higher doses, CBD can reduce the unpleasant side effects of THC, which can result in a physically and mentally relaxing high. However, at low doses, CBD does the opposite – enhancing effects of THC such as pain relief and relaxation, and potentially increasing the sensation of being high, particularly in those who infrequently use weed.

Yes, you can use CBD and not get high!

You can rest easy if you’re a CBD fan or curious new user who doesn’t want to get high (or legally should not). Hemp-derived CBD products can give you all of the peaceful, relaxing, and pain-relieving benefits of this versatile cannabinoid, without any chance of an unwanted high.