The potential benefits of treating PTSD with cannabis are many, but there are risks to consider. Here’s what the latest research has to say about marijuana and PTSD.
Health Leave a comment
Guy Sherman 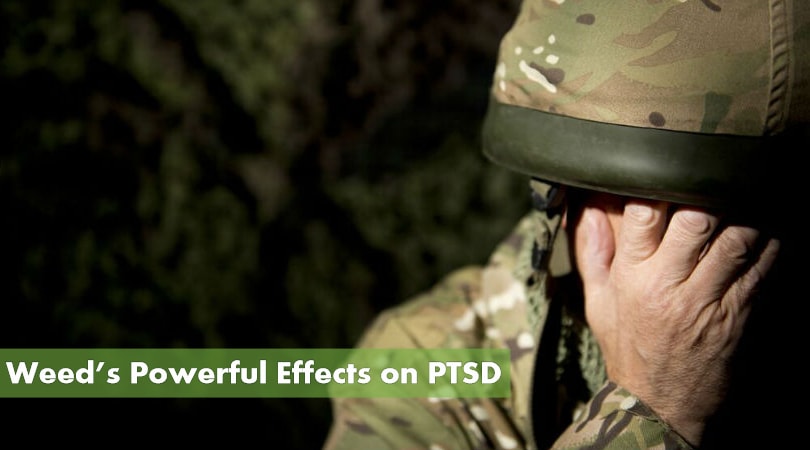 Post-traumatic stress disorder (PTSD) is a debilitating chronic psychiatric condition that develops in response to witnessing or experiencing any type of traumatic event – such as a natural disaster, violent assault, or the horrors of war. Conventional psychiatric medicine often fails to alleviate the symptoms of PTSD, leaving patients unable to turn off the continual loop of traumatic memories. Many PTSD patients are turning to marijuana instead and seeing significant symptom improvements. But there are potential risks in using weed for PTSD. Here’s what we know about the link between cannabis and PTSD so far:

Marijuana is well-known and beloved for its ability to calm a racing mind, elevate a depressed or irritable mood, relieve pain, and either energize or encourage sleep, depending on the strain. Our bodies naturally make cannabinoids (chemical compounds also found in weed), which interact with our brain to regulate a variety of body systems and functions, from movement and appetite to mood and sleep. Sufferers of PTSD have lower levels of a cannabinoid called anandamide, which causes the brain to hold onto traumatic memories in a way that it ordinarily wouldn’t. The cannabinoids in weed may be able to “fill in the gaps,” bringing levels of these chemicals back into balance.

PTSD is characterized by persistent intrusive and distressing memories, flashbacks (a vivid sensation as if re-experiencing the traumatic event), recurrent nightmares about the traumatic event, avoidance of any stimuli that trigger a memory of the event, and extreme physical or emotional stress when exposed to one of these triggers. Other common symptoms include always feeling “on alert,” as though expecting danger (hypervigilance), startling easily, sleep problems, irritability, and detachment from relationships and activities you once enjoyed. In addition to effective relief from these and other effects of PTSD, cannabis may actually be able to help your brain heal, reducing the frequency of unwanted, intrusive memories.

Approximately 7-8% percent of adults in the United States will develop PTSD at some point in their life. PTSD rates among veterans of war are significantly higher, with estimates ranging from 11-30% depending on the war in which they served. The higher veteran rates of PTSD are due primarily to the extreme conditions of combat, but may also be attributed to alarmingly high rates of military sexual trauma (MST). PTSD can develop whether you directly experienced a traumatic event, witnessed it (including on television) or heard it described. Feelings of guilt may also be involved – whether for acts carried out during military combat or to survive a harrowing situation, or “survivor’s guilt,”

cannabis may help your brain heal, reducing the frequency of unwanted, intrusive memories.

Research on cannabis and PTSD is still relatively limited. There is considerable evidence that marijuana can alleviate many symptoms of PTSD. Some research even suggests that compounds in cannabis could help rewire the brain to release its tight hold on traumatic memories. However, if overused to the point of abuse (which is relatively common among PTSD sufferers, particularly veterans), weed may do more harm than good.

People with PTSD often experience deeply disturbing recurring nightmares related to trauma they’ve experienced or witnessed, waking up in a cold sweat, unable to go back to sleep. These nightmares can continue for many decades after the initial trauma, The resulting poor quality of sleep can lead to daytime fatigue. Anxiety about re-experiencing the nightmare can cause difficulty falling asleep and many with PTSD lean on the overuse of alcohol or other substances to aid with insomnia. Anti-depressants and “sleeping pills” are often prescribed for insomnia related to PTSD, but they are not always effective.

For many, marijuana is the only thing that helps them achieve a decent night’s sleep without traumatic dreams. Cannabis has been shown to help reduce the incidence of nightmares as well as daytime flashbacks. Some strains make falling asleep easier and soothe the racing thoughts and anxiety that often plague those with PTSD.

For many, marijuana is the only thing that helps them achieve a decent night’s sleep without traumatic dreams.

Weed as an alternative to alcohol abuse

Alcohol abuse is a common coping mechanism for PTSD sufferers. For many, the black hole of drunkenness is the only escape they can find from their anxiety and intrusive thoughts. Countless PTSD sufferers credit switching from alcohol to cannabis with their recovery from alcoholism. Despite strong anecdotal evidence that weed can be an effective alcohol substitution, an observational study conducted by Yale School of Medicine did find a correlation between heavy use of marijuana and increased alcohol consumption among veterans diagnosed with PTSD.

An exciting link between weed and the “extinction” of traumatic memories has been shown in animal studies. Pathologically low endocannabinoid levels can cause the brain to hold on tightly to traumatic memories. Elevated endocannabinoid levels (combined with exposure therapy, a common psychotherapy method designed to reduce sensitivity to triggering stimuli) may be able to help the brain loosen its grip. Much more research is needed to determine how this life-changing result could be consistently achieved for human PTSD patients.

C-PTSD (complex post-traumatic stress disorder) is a type of PTSD that typically stems from prolonged exposure to traumatic living conditions – rather than from a particular defining event. C-PTSD can be caused by living in a war zone or being a prisoner of war, or by experiencing ongoing emotional, physical, or sexual abuse, or childhood neglect. Any of the symptoms of PTSD may be present in C-PTSD sufferers, in addition to emotional problems, dissociation, negative self-perception, or Stockholm Syndrome. The anxiety-reducing, nightmare-reducing, and mood-boosting effects of cannabis can likewise provide some relief for those suffering from C-PTSD.

The anxiety-reducing, nightmare-reducing, and mood-boosting effects of cannabis can likewise provide some relief for those suffering from C-PTSD.

PTSD is currently a qualifying condition for medical marijuana in almost every U.S. state where it is legal. However, only civilian medical practitioners are permitted to prescribe it. The U.S. Department of Veterans Affairs (VA), the government agency that provides health care for a large percentage of military veterans, is not currently allowed to prescribe medical marijuana. This is due to weed’s illegal status at a federal level.

Q: What are the best marijuana strains for PTSD?
A: The effects of different marijuana strains will vary from person to person, but in general, strains that promote relaxation, deep sleep, and a pleasant emotional state are most effective against PTSD. A few popular selections include Blueberry Kush, Blue Dream, Grand Daddy Purple, Harlequin, and Northern Lights.

Despite the potential benefits of medical cannabis to active duty servicemen and women, marijuana is still federally classified as a Schedule I substance in the United States. Since the military is governed by federal law, marijuana use (including CBD products) is illegal by those serving in the U.S. military and will likely result in discharge. This applies even if you have a medical marijuana card or reside in a state where recreational cannabis is legal. However, veterans will not lose their benefits if marijuana use is discovered.

CBD (cannabidiol), a non-psychoactive chemical compound found in marijuana, may be extremely effective against symptoms of PTSD. It’s possible that CBD may even be able to help the brain heal from this potentially debilitating condition.

How does CBD help PTSD?

CBD has been shown to provide effective relief of many common PTSD symptoms. It can reduce anxiety, pain, and stress, improve your mood, and reduce inflammation that can contribute to fatigue. It’s actually possible that CBD can do more than just reduce the symptoms of PTSD. Studies have shown CBD to be among the cannabinoids with the exciting potential to help rewire the brain for the “extinction” of traumatic memories.

CBD oil is one of the most popular delivery methods for a variety of conditions, including PTSD. Benefits of CBD oil include how quick and easy it is to take, and the ability to get a more precise dose than with other methods. CBD oil does not carry the health risks associated with smoking, though it does take slightly longer to kick in (typically around 20 minutes, compared with smoking’s nearly instantaneous effect). CBD oil derived from cannabis may still include small amounts of THC, which, for some PTSD patients, is a perfect combination. However, if you want to avoid THC or live in a state where it is illegal, hemp-derived CBD oil is a safer alternative.

So far, limited research has been done on the effects of CBD on PTSD. However, the studies that have been done show promising results. The U.S. Department of Veterans Affairs (VA) has a new study underway, aiming to ascertain whether CBD (used alongside exposure therapy) is an effective PTSD treatment for veterans.

CBD may be extremely effective against symptoms of PTSD.

THC (tetrahydrocannabinol) is the component of weed best known for getting people “high.” THC can help with a few symptoms of PTSD, such as loss of appetite, intense stress or anxiety, and insomnia (though THC can worsen anxiety, paranoia, and hypervigilance for some people). Many people with PTSD are plagued by nightmares during the REM (rapid eye movement) stage of sleep. THC can help the brain spend less time in REM sleep, reducing the occurrence of disturbing nightmares. However, if you abruptly stop using cannabis, you may experience a THC withdrawal symptom known as “REM rebound,” where time spent in REM sleep temporarily increases, which could cause a resurgence of nightmares.

Risks of using THC for PTSD

Treating PTSD with THC does carry a degree of risk. Some people experience anxiety or paranoia when using it, and it is also possible to become addicted to the euphoria and feeling of “escape” from one’s symptoms. Marijuana addiction is generally considered more comparable in severity to caffeine addiction than to hard drugs like heroin. However, abuse of marijuana has been shown to correlate with higher rates of violent behavior, alcohol abuse, and PTSD symptoms in U.S. veterans.

Considering the ample side effects and hit-or-miss success of conventional psychiatric medicine for PTSD symptom management, cannabis has become the preferred treatment for many with PTSD. Yes, there are potential risks to using weed for PTSD, and research on its safety and efficacy is still lacking. But for many, the relief they experience from cannabis far outweighs the risks.