Evolution of Cannabis Farms in the US

How the farming industry has not only changed, but grown.
Industry Leave a comment
Guy Sherman 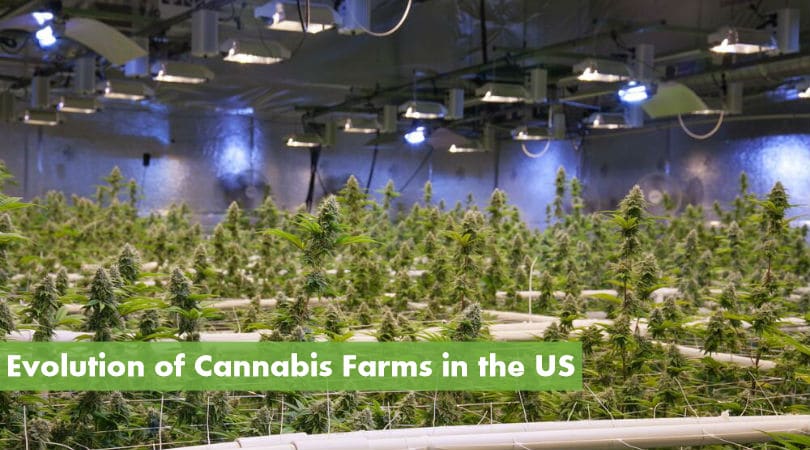 From the beginning of time, cannabis has been part of our human lives. Since then, many different changes as to the perceptions of the plant have affected how it is received by the public.

Recently, we have seen more and more acceptability from the public. Leading to a wave of states softening their stance on marijuana. Here, we will be talking about that shift, where it began, and how we got to where we are today.

California became the first state to legalize cannabis at any level, choosing to do so medicinally. Those with chronic ailments could get a prescription for medical marijuana and not face any legal ramifications.

The 1990s had four other states and D.C. legalize medical marijuana. Oregon, Washington, Alaska, and Maine.

Colorado soon followed. After a failed 1998 petition to add Amendment 19 to the state’s Constitution, allowing the use of marijuana for medicinal use, in 2000, they Amendment 20 was passed. Which made Colorado the first state to have cannabis legalized in their Constitution. This would be the first big step towards recreational legalization.

The movement would continue to grow, as in the years after making it legal for someone to possess cannabis as long as they had a prescription, the newer push was decriminalization. Once that was set in stone, a real act was in place for full on recreational legalization. 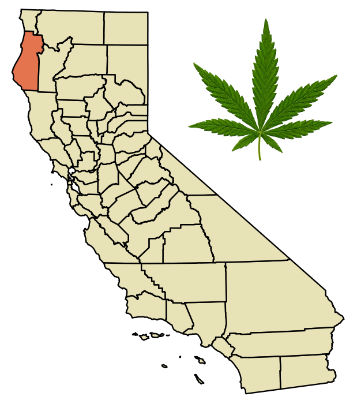 Would be remis if we didn’t at least touch on the story of Humboldt County California. A small area in the northern part of the state, has its roots deep within the cannabis trade. In the 1960s, droves of people from the Haight-Ashbury section of San Francisco went there to escape from the big city and in-your-face governmental control.

These people already armed with the knowledge of the cultivating business, set up shop on the country-side. And made quite a name for themselves. The children though, had different ideas of how to grow the business.

After the legalization for medical use in 1996, the cannabis trade in Humboldt Co was turning in quite a profit, and the new generation were dead set on taking advantage of it. But, there would be draw backs.

In 2016, new regulations made it necessary for those that were originally flying under the radar, to come into the light. Now that there was legislation, new tactics and rules had to be followed. Taxes, registration fees, compliance rules, and now, competition.

Not to mention when Prop 64 was passed. That proposition passed recreational use in California. A lot may think this would be a great idea for the farmers. More need for the product, should mean more business for the source, right? Well, in Humboldt County, that was not the case. Tax increase, licensing fees, which were tied to how much your grow was, left the amount of profit at a high-time low. Many growers decided to stay underground, as doing so keeps the profit margin high.

Deep pocketed agriculture companies decided to get into business as well. And as with anything else, when there is a flood of product into the market, prices start to drop. In 2016, price for a pound was over $2000, but by 2019, the price was less than $1000.

The black market trade hasn’t been affected though. Without being out in the open, black market farmers are not liable to the same restrictions, nor are their profits affected by all of the new expenses.

The same issues experienced there in northern California, aren’t the same in places like Colorado. In the first month after the 2014 legislature went live, recreational sales of cannabis reached over $14 million. Medical sales were more than twice that, $32.5 million. Total annual rec sales that year exceeded $300 million, and medical sales hit $380 million. A big boom in business, to say the least.

In three years since, the numbers of stores went from 156 recreational stores, to over 500. There have also been an influx of licenses applied for and given that run the gamut of the cannabis industry. Distribution, testing, growth and sales, all totaling over 2000 have been issued. According to a report, in the first year of legalization, new cannabis businesses amounted to just under 1% of the total businesses starting that year. That may seem like a small number. It is, but when less than 30% of the state agreed to have marijuana stores, medical or recreational, and 3000 stores pop up in one year, well, that speaks volumes as to the impact the industry has had, economically.

That same report showed that among the warehouse space that would be needed to store the product before distribution, 14.2 million square foot of space had been rented. That’s 2.9% of available space being taken up by cannabis. Once again, sound low, but those numbers just reflect Denver.

The numbers of stores went from 156 recreational stores, to over 500.

It’s difficult to determine exactly how man people are actively and legally working in the industry, as these types of records are not kept. What is kept, are the number of business licenses that are given. Because there could be some that just simply obtain the license, and do not use it, Colorado believes that for every 1 license issued, accounts for almost .5 employees. In 2018, 38,000 individual licenses were issued. Another 1600 business owners licenses were issued as well. If the math holds, that’s roughly 20,000 jobs in Colorado alone, thanks to the growing cannabis industry. In 2017, about 5.5% of the increase it working citizens in Colorado can be attributed to marijuana.

When it comes to taxation, about 30% of revenue goes to paying state and local taxes. The allocation for those taxes is as follows; $40 million goes to the renovation and upkeep of the public school system, local governments get 10%.

Other ways cannabis is growing

What is the biggest thing needed in order to get into the business? Money. And while there was an influx of financial institutions giving out loans to help startups, that trend has changed. According a report on Marijuana Business Daily, lenders are shifting to equity investments. Actually buying in to the market, instead of just handing out a loan. That disconnect from the industry, has now evaporated. Between 2017 and 2019, interest bearing loans have gone from 37%, down to 22%. Whereas equity investments have risen from 61% to 78%. Public stock purchases by money managing firms have also risen since 2017. This tells us that business is booming, so much that money firms are taking notice, and are ready to buy-in.

The boom has affected sales and production in New Jersey too. So much that 15 new cultivators will be needed between now, and 2022 to fill the orders of a population that is expected to triple.

Part of the reason for the increase in farming needed in the state is not just about making sure the inventory stays full, but also to help with the cost to the end user. At this point, an average customer in New Jersey pays $6,000 a year for their medical marijuana, whereas a customer obtaining the same amount would cost a patient in Oregon just over $2,000.

The call for stores in the Ontario region of Canada has sparked a new campaign. The city will hold a lottery for 42 new stores. This is a reflection of a call from the community that more locations are needed, and the council believes the market is sustainable. Another 8 licenses will be available after the initial 42 stores are granted as a first-come, first-serve basis.

Cannabis employment rates in California have risen 34% in 2019, according to another report on MBD. At this moment, the cannabis industry employs more workers in California than Web Developers, flight attendants, Veterinarians, and legislators. Some more numbers to take hold of are that the economic impact will increase 35% over what it was in 2018. That’s a total of $48 billion, from $39 billion a year ago.

Cannabis sales out-performed e-cigarettes, Fortnight, and Goldfish crackers. And sales of cannabis-related products will also increase by 35% in 2019.

Half of Canada’s cultivation applicant are stuck in limbo. There was a change in the process to get licensed at the end of 2018, and many of those that were attempting to get the rights to grow legally are in flux. But once those issues are resolved, look for the farming business to boom in a country that is already claiming a shortage.

Once those issues are resolved, look for the farming business in Canada to boom.

Marijuana has long sense been big business in the Americas. It’s been said that some of the forefathers even grew their own plants for personal and textile uses. But during the full prohibition period, which was designed to put a stop to widespread use, most were driven underground. But recently, the legalization movement has caught traction. In almost every market, business is thriving. More farms, for distribution, more dispensaries or retail stores to serve an already existing market. One that once got their weed from a private grower, or dealer, and risked the negative consequences can now buy cannabis legal in many states.

Since California passed Proposition 215, allowing for legal, medicinal use this country-and Canada-have stepped up to the plate and began to reap the benefits. Taxes going to the school systems and to help with transportation issues among other things. The increases in employment in every community that have accepted cannabis have all began to decrease the stigma on it. And let’s not forget that these advancements are also furthering the knowledge we have on the benefits of cannabis-related products for mental health issues, chronic pain, and other diseases and illnesses.

We have come a long way in just over 100 years, and so far, there doesn’t seem to be an end.