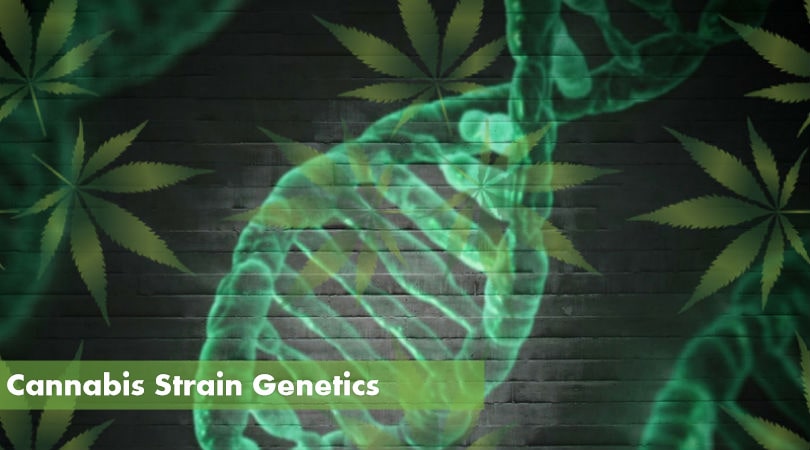 As a regular marijuana user, how often do you come across a cannabis strain that completely blows you away by its quality and uniqueness? The color, taste, smell and the ‘feel’ of a particular strain make you go back and revisit the experience. You might be smoking the same old White Widow you have been smoking already but something about it is different. The question is why? The answer lies in the genetics, environment, and evolution of cannabis strains.

How Cannabis Strains Developed Over The Years

The earliest species of the cannabis plants are believed to have their origin somewhere in the mountains of Hindu Kush region of Pakistan as well as some tropical countries along the equator. These early species commonly called Landraces, grew on their own in the wild, adapting and changing over thousands of years. Popular varieties, Indica, and Sativa – populated between 0 to 30 degrees latitude and 30 to 50 degrees latitude respectively – which offered a drastically different growing environment. These diverse habitats resulted in a colorful array of unique cannabis varieties.

During the 70s and 80s when the federal anti-cannabis stance was at its peak, cannabis cultivation moved from outdoors to indoors. This drastic change in habitat paved way for a number of genetic changes in cannabis plants due to a number of variables such as:

Just about at the same time when indoor cultivation became common, hybridization of the popular Indica and Sativa strains started as well. This was a defining moment in the evolution of cannabis strain genetics. Growers increasingly experimented with intermixing of resin-coated Indica buds with Sativa buds known for their uplifting effects. This hybridization has resulted in a virtually endless variety of genetically different cannabis strains, each with their own unique flavor, appearance and effect.

Cannabis strains can be categorized as pure and hybrid as the two main types.
Pure varieties comprise of:

Hybrid varieties are a combination of any of these three pure varieties designed to enhance a particular characteristic of a plant. This is also done to differentiate a strain and to market it more effectively.
Let’s discuss each of these varieties with a focus on their genetics.

Cannabis sativa is one of the most commonly grown species of the Cannabis genus. It has been cultivated throughout the recorded history as a source of industrial fiber, seed oil, food, recreation, medicine and in spiritual settings. Cannabis Sativa is believed to have originated in the equatorial countries of Colombia, Mexico, Thailand and South East Asia – all of which are relatively warm so the plant thrives in warmer weather.

Sativa plants can be identified by their extremely sharp characteristic smell which can range from sweet and fruity, to pepper like and earthy with traces of diesel fuel. When fully grown, Sativa plants can grow relatively tall with heights reaching up to 4.5 meters. They have long internodes and branches, and large, narrow-bladed leaves. Sativa plants have a long vegetation periods; growing and flowering can take close to six months. This results in a higher yield compared to Indica strains but the THC percentage is lower than Indica on average. Since the vegetation period is long, it is difficult to cultivate landrace Sativa indoors.

Sativa strains are recognized by their uplifting effect that affects the mind directly, producing an energizing and stimulating effect. It also gives a strong creative stimulus which has resulted in many artists and musicians becoming regular users to revitalize their creativity. Sativa can make a person laugh uncontrollably or make them think about the deeper meaning of life. Some users have found that a Sativa high can make them experience music, sounds, movies and art at a higher level which makes the experience more enjoyable. People suffering from depression have also found the use of Sativa helpful.

Another commonly grown pure type of cannabis strain is Indica. Cannabis Indica originated in the Hindu Kush mountain regions of Pakistan and Afghanistan and is widely cultivated in both these countries as well as Morocco and other parts of the subcontinent. The name origin of the word ‘Indica’ can be traced to its origin from Indian subcontinent when Jean Baptiste Lamark first published a description of this cannabis species in 1785. The words ‘India’ and ‘cannabis’ gelled together turned into Indica.

Indica plants are short with fat and wide leave blades. Unlike Sativa, Indica plants are short with height usually ranging from 2-6 feet. The average yield of Indica ranges from 1.5 to 2.5 ounces per plant and the THC content is typically more than Sativa strains. The short height of Indica plants means that they can be grown indoors easily. The flowering period of Indica strains is typically between eight to twelve weeks. Commonly found flavors and aromas of Cannabis Indica can range from pine, skunk, earth, hash to a sweet and sugary flavor.

Due to the presence of higher CBD levels compared to Sativa strains, pure Indica is known to give more of a ‘stoned’ feeling. An Indica high is known by many of its users as “body buzz”. It has strong pain and muscle relaxation properties in addition to its recreational use.

Some of the common use of Indica strains in medicine include:

Commonly used Indica strains for recreational and medicinal purpose are Kush and Northern Lights. Most growers of Indica strains over the past 20-30 years have selected and bred to obtain higher THC levels to cater to recreational users, which has decreased the CBD levels to almost 1%. Efforts are now being made to produce more of CBD-rich strains due to wider recognition of them being more suited for medicinal purposes.

Difference between Sativa and Indica (Sativa vs Indica)

The cerebral or physical effects of cannabis strains is usually determined by the two types of compounds found in them; cannabinoids and terpenes. Cannabinoids that have the most effect on the effect of a particular strain are THC and CBD. These are molecular structures with unique properties and medical benefits. Terpenes are aromatic oils that control the smell, aroma and the overall feel of a particular strain

Indica strains are usually considered to be more sedating and relaxing, likely to make you sleep with full body effects. With Sativa strains, a more uplifting effect resulting in more energy and creativity is often experienced. Indicas are therefore preferred for nighttime use and Sativas are more suited for use during the daytime.

According to most studies, cannabis Sativa has higher levels of CBD to THC ratio and cannabis Indica has a higher THC to CBD ratio. That being said, there is a huge variety within each type of strain family and it is hard to draw a line to differentiate based on CBD and THC levels.

A species of cannabis that is not often talked about is ruderalis which is an auto flowering type of plant Ruderalis species can grow despite its harsh environments due to the presence of humans or other naturally occurring disturbances in an area. Some experts believe ruderalis to be a descendant of indica genetics that managed to deal with harsh climate. Cannabis ruderalis is found in parts of Asia, Central/Eastern Europe, and Russia. For many years, ruderalis species of cannabis was considered to be a wild breed of cannabis, however, in recent times, growers have brought it indoors to make hybrids with sativa and indica strains.

The plants of cannabis ruderalis can grow between 1 and 2.5 feet in height and have thick and sturdy stems. The most distinctive feature of ruderalis species is that its flowering cycle is induced according to its maturity instead of being affected by photoperiod as is the case with indica and sativa species. Auto flowering occurs between 21 and 30 days of vegetation regardless of the light cycle and the plant is ready for harvest in 70 to 110 days from seeding.

Ruderalis plants independently do not have a high enough THC level to make it worthwhile for growers but when combined with other strains from indica or sativa species, they can be used to create exotic auto-flowering hybrids. These hybrids contain unique potency and aromatic features of their genetic partners and have become very common in recent times.

When the three basic genetic types of cannabis strains i.e indica, sativa and ruderalis are combined interchangeably, hybrid varieties with special traits can be cultivated. Hybrid varieties contain varying ratios of these three types of strains. Commercially available crossbred varieties may contain a mixture of ruderalis, indica, and/or sativa and are mostly used for medicinal purposes since auto-flowering varieties are usually not the best in taste, effect and aroma. Recreational users usually prefer hybrids that are a combination of only indica and sativa species.

There is a seemingly infinite variety of hybrids available in the market today most of which are the result of marketing strategies by big companies. When creating a new hybrid, what usually happens is that a seed strain that has existed somewhere for generations is brought into the lab and mixed with an already existing stable strain such as White Widow. After prolonged testing, a particular color, look, aroma and taste is achieved and the hybrid is launched into the market with a hefty price tag. Most of the time, the new hybrid is an improvement upon the parent genetics and is made with a particular set of consumers in mind that demand high-quality strains.

There are many different types of hybrid varieties categorized by the nature and method of production. Let’s discuss them one by one.

Also known as IBL, this variety of cannabis strain hybrids is achieved by selectively inbreeding to preserve or stabilize certain feature in a strain. This does not mean that there won’t be any variation between seedlings but they will share a number of characteristic traits with no phenotype variation.

When two separate Inbred Lines are crossed, the result is called an F1 hybrid. F1 hybrids are usually fast growers and high yielders than either of their parent IBLs but they also have a greater degree of variation between seedlings.

F2 hybrids are the result of crossing two separate F1 hybrids. F3 and F4, similarly, are a crossing of F2 and F3, hybrid parents. As we move towards a higher F number, the chances of variation in resulting seedlings increases, the likelihood of parents passing their unique traits onto hybrids reduces, and the results become unexpected.

A synthetic variety of cannabis strains is achieved by interbreeding three or more IBLs in all possible combinations and using a mix of all the seeds produced from those crosses. This is one of the least common methods of breeding cannabis strains.