THCV: A Complete Guide to Tetrahydrocannabivarin 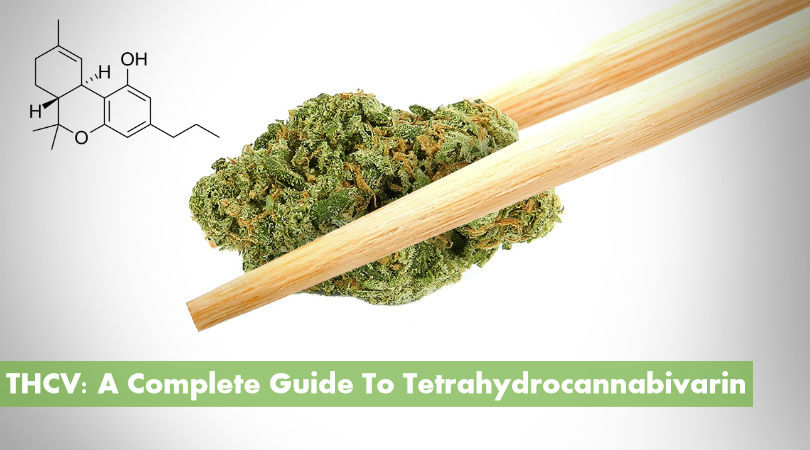 Whether you’re a recreational cannabis user or you’re a novice looking to explore the many health benefits of various cannabinoids, you may be interested in learning more about THCV. This article will explain extensively what exactly is the cannabinoid THCV (tetrahydrocannabivarin) and why it’s quickly becoming one of the most researched and widely marketed cannabinoids out there. You’ll learn about what makes it unique, the difference between THCV and THC, and its many health benefits including appetite suppression and treatment for neurodegenerative diseases. You’ll also learn more about the legality of THCV, which strains contain the highest amounts of it, and where to find products high in THCV.

THCV (also known as tetrahydrocannabivarin) is a minor cannabinoid found in trace amounts in most strains of marijuana. Occasionally called the “sports car of cannabinoids”, THCV contains numerous unique health benefits not found in other cannabinoids such as THC and CBD. Found most prevalently in Cannabis sativa, THCV has a subtle molecular variation from THC that makes it act differently from THC and causes strains rich in it to produce a more stimulating, energetic high.

Although scientists discovered THCV in 1973, not a lot of research has been done about it until the last few years. The science behind THCV’s health benefits is only in its beginning stages, with more research needing to be done to verify and further replicate its positive effects. One of the difficulties of studying the effects of THCV is its scarcity, with most strains of marijuana containing negligible amounts of it. However, more will be revealed as researchers have recently begun to study it in isolation at the same time as growers have started breeding special strains of marijuana to be high in THCV.

Q: What is THCV?
A: THCV is a minor cannabinoid found in trace amounts in most strains of marijuana, with high amounts showing numerous health benefits. These benefits include appetite suppression, regulation of blood sugar levels, bone health stimulation, and a reduction in panic attacks.

THCV acts differently from THC and causes strains rich in it to produce a more stimulating, energetic high.

What are the Differences Between THC and THCV?

THCV is similar in structure to THC with the only structural difference being the presence of a propyl (3 carbon) group rather than a pentyl (5 carbon) group. This variation means that while THC is a CB1 receptor agonist, activating CB1 receptors in the brain, THCV is a CB1 receptor antagonist. As a CB1 antagonist, small doses of THCV do not get you high, although higher doses can cause it to switch and behave as a CB1 agonist. This essentially means that in order to produce a psychoactive effect similar to THC, you need to consume high quantities of THCV.

Because THCV is said to dampen the effects of THC similarly to CBD, the end result of ingesting a strain containing high levels of both is a high unlike most you’ll get from THC. Most strains rich in THCV are described as inducing a shorter high that’s more explosive in intensity, without the traditional effects of lethargy. One of the biggest differences between the effects of THCV vs THC is that THCV does not make you hungrier; in fact, it may increase satiety and reduce the overconsumption of food typically associated with THC.

How is THCV Created?

Most cannabinoids are synthesized from cannabigerol (CBG), which goes through a metabolic process that forms cannabinoids such as CBD or THC. THCV is formed after the joining of divarinolic acid and geranyl phosphate, after which the resulting THCV acid gets decarboxylated to form THCV.

What are THCV’s Effects and Benefits?

While appetite suppression is not necessarily a health benefit, it can be used in coordination with calorie restriction and a healthy diet to aid in weight loss. THCV is a much healthier option to suppress appetite than serious prescription medications that often can come with serious side effects.

THCV can moderate the appetite stimulating effects of THC in addition to its own appetite suppressing capabilities.

Insulin resistance and inability to regulate blood sugar are two of the most prevalent symptoms of Type II diabetes, and animal studies with THCV have shown it to decrease blood glucose levels and increase insulin production, making it a potential treatment. Its anti-inflammatory qualities have also been shown to aid in easing the pain of neuropathy, another painful symptom of diabetes.

THCV’s ability to promote the growth of new bone cells could cause it to become a method for treating osteoporosis. It could also be used to treat other bone conditions such as rickets or osteomalacia, a disease that weakens bones and can cause them to break more easily.

Research is currently in progress showing THCV’s reduction in the effects of certain symptoms of Alzheimer’s Disease such as tremors, motor control, and brain lesions. Research has shown THCV’s antioxidant neuroprotective properties make it useful in relieving symptoms of Parkinson’s disease and potentially delaying its progression. Its anticonvulsant properties have also shown an improvement in the symptoms of seizure related disorders such as epilepsy.

THCV has shown an ability to reduce or even eliminate anxiety attacks without suppressing emotion, which makes it an effective treatment for patients with anxiety disorders such as PTSD. Research has shown that THCV can enhance 5-HT1A receptor activation, creating antipsychotic effects that may be useful in treating some of the negative cognitive symptoms of schizophrenia.

While THC can be known to increase anxiety in some marijuana users, anyone looking to lessen or eliminate that effect may benefit from trying a sativa high in THCV. It may be that they are more susceptible to anxiety attacks from strains with too high a concentration of THC, and that trying one high in THCV can have a calming effect.

THCV has shown an ability to reduce or even eliminate anxiety attacks without suppressing emotion.

THCV is considered to be an antioxidant with anti-inflammatory effects as well, with research showing decreased signs of inflammation and inflammatory pain in mice. While it is known to block CB1 receptors, it is the potential for THCV to activate CB2 receptors in vitro that give it the ability to decrease inflammation.

Q: Can THCV Help You Lose Weight?
A: THCV contains suppresses appetite in small doses, which can lead to weight loss if combined with a reduction in overall calorie consumption. It doesn’t completely eliminate hunger, but it does reduce the appetite stimulating effects of THC.

The legality of THCV in the United States is unclear. Because it is comes from cannabis and is psychoactive in large doses, it may fall under the umbrella of “Marijuana Extract” and be prosecuted at the federal level. However, some individual cannabinoids such as hemp-derived CBD are still legal (providing it contains no more than 0.3% THC).

THCV is not scheduled by Convention on Psychotropic Substances, and is not specifically listed as a Schedule I drug in the United States. Because THCV could be considered an analog of THC, possession intended for human consumption could be prosecuted under the Federal Analog Act.

In the United Kingdom, THCV is “listed as a Schedule 1 to the Misuse of Drugs Regulations 2001 as a controlled drug which has no recognized medicinal benefit in the UK”, essentially meaning it is illegal to sell or possess THCV in the UK.

Q: Is THCV Legal?
A: While THCV is illegal in the UK, the legality of THCV in the United States is unclear; while it is not technically classified as a Schedule I drug in the United States, possession of THCV could most likely be prosecuted federally.

Which Strains are High in THCV?

In order to feel the effects of THCV, you’ll need to consume a strain that’s high in THCV. African sativas have been shown to contain higher amounts of THCV than indicas or hybrids, and a few have been specially bred to be high in THCV in order to take advantage of its popular effects of appetite suppression and anxiety reduction. The following strains are known to be particularly high in THCV:

Doug’s Varin is a rare sativa strain that has an aroma of earthy pine and sweet citrus. This strain is known to contain up to 28% THCV, and is specially bred to have a high THCV content. It is the first strain known to have more THCV than THC, with a THC to THCV ratio of 6:7.

This strain has up to 38.44% THCV, and was also bred for high levels of THCV. Slim Hash was created by Andrew Campbell and won “Best Concentrate” at the 2017 Cannabis Classic.

Pineapple Purps is a rarely found strain is shown to express a 3:1 ratio of THC to THCV, usually containing THCV levels of around 4%. It’s known for its fruity fragrance and pineapple flavor, with energizing effects that also relax the mind. It’s typically recommended that novices begin with small amounts to avoid being overwhelmed by this potent strain.

Other sativas high in THCV include:

Two hybrids that contain high levels of TCHV are:

What THCV Products are There?

Strains high in THCV can be consumed in flower form or processed into extracts, oils, and edibles for a higher concentration of cannabinoids. No matter what your preferred method of ingesting marijuana, there’s a THCV product for you.

If you prefer taking it in tablet form, there are tablets that contain equal parts THCV, THC, and CBG that you can dissolve under your tongue and feel the effects within 10 minutes. The interaction of the three cannabinoids can give you a calming effect without being sedating. THCV oils are also for sale if you’re looking to consume low amounts of THCV for its therapeutic benefits rather than its psychoactive effect.

If you’re more interested in vaping, there are a number of different vape pens and cartridges to choose from that contain either pure THCV or a 1:1 ratio of THCV:THC. However, THCV has a higher boiling point than THC, so keep that in mind when setting the temperature of your vape pen. You can also make your own edibles with high THCV strains if edibles are your preferred method of consumption, although the higher boiling point means you’ll need to bake them at a higher temperature as well.

THCV is currently being marketed as a “diet weed”, a popular cannabinoid with appetite suppressing benefits. Its THC modulating effects make strains high in THCV give you a balanced, energetic high that doesn’t cause you to be a couch potato or give you the munchies. While most strains currently contain minimal levels of THCV, more and more strains are being bred to contain high levels of THCV in an effort to take advantage of its unique properties.

THCV is one of the most important medicinal cannabinoids in marijuana, showing a wide variety of health benefits. While more research needs to be done on the isolated effects of THCV and its role in treating the symptoms of neurodegenerative and spastic diseases, it’s safe to say the THCV is drawing the interest of researchers and consumers alike. As growers continue to breed high THCV strains, the effects of Tetrahydrocannabivarin are bound to become even clearer.

Where can I buy these seeds? Everyone is always out of stock-

Hello, I do not understand why there is NEVER stock in Canada of THCV products.
I was using one and they closed the company!! It was amazing!
Are we ever going to get any? Is there anyone that has even 1 product in whole of Canada?? Very strange, the best products that really help always disappear…
Please give me just one retailer that carries one
Thanks