Are Cannabis and Chess a Winning Match?

Can using marijuana improve your chess scores - or make you play worse? Here's what really happens when you mix weed and chess.
Lifestyle Leave a comment
Guy Sherman 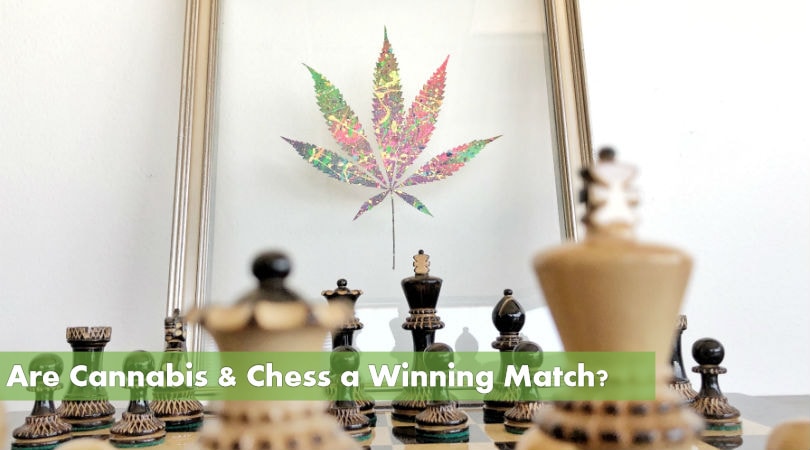 Whether marijuana and chess go together or not seems to be a polarizing topic. Some people swear that they play better when high. Others report their chess scores when stoned are embarrassing at best. Does cannabis actually enhance (or damper) your chess skills? Which chess players might enjoy playing under the influence – and who should probably abstain? How exactly does marijuana fit into the world of chess?

Whether you’re an avid or casual chess player, it’s easy to see how the influence of cannabis could make the game sound even more appealing. Chess can be a fun social activity and/or an intriguing puzzle requiring a creative solution (against a person or a chess computer) – both favorable ideas to many stoners. Some players may find themselves particularly drawn to one particular type of chess, such as “blitz chess” (a sped-up, timed version of the game), while they’re high.

How does cannabis affect your chess game?

Online chess forums are full of anecdotes from chess enthusiasts of all skill levels – comparing their stoned scores to their sober ones, or sharing stories about their personal experiences with cannabis and chess. One frequently-shared experience is feeling confident (while high) that you’re playing at your best – only to look at scores later on and realize the opposite was true!

Short-term memory is essential to plotting your strategy as you play through a game of chess. However, science suggests that short-term memory is impaired when you’re stoned. Your long-term memories (like your mother’s name or the red bicycle you got for your 10th birthday) are unlikely to be affected, but forming and recalling new memories is harder when you’re high. Your short-term memory function is regained as the high works its way out of your system – typically returning to normal capacity within 24-48 hours.

Forming and recalling new memories is harder when you’re high.

It does appear that some users may “build up a tolerance” to this cannabis-induced short-term memory loss. As the brain becomes accustomed to cannabis exposure, it’s no longer as sensitive to these effects. However, your chess strategy could be permanently affected if you consistently overdo it. Heavy, long-term marijuana use is associated with permanent damage to short-term memory function, even when you’re sober. More research is needed to pinpoint which factors are the true cause of this correlation.

Some cannabis users find that it enhances their sense of focus, evoking a condition known as “tunnel vision” – in which all of your attention is placed on one task alone. It would appear that this effect would translate into the perfect headspace to play chess. And for some users, it does feel helpful. However, it’s worth keeping in mind that you may lose this sense of focus as the game goes by. If, for example, you get distracted by something external to the game, or the THC begins to hit you harder, you may “break the spell” and lose your focus. Or, if you’re playing chess at the tail end of a cannabis session, your sense of focus may fade away as the high does.

Many cannabis users describe their thoughts when high as more creative, or even mathematical or geometric. This may lend itself well to the challenge of piecing together a chess win. Brilliant as these thought patterns may be, however, it is possible for the other side effects of weed to overshadow or distract you from them.

Many cannabis users describe their thoughts when high as more creative, or even mathematical or geometric.

It’s common when you’re high on weed to experience the passage of time at a completely different pace. This could make playing a timed chess game feel completely discordant. You might end up taking 20 minutes to decide your next move, but feel like it’s only been 5. If your opponent is also under the influence, they may experience a totally different time variance. As you can probably imagine, waiting that long for your opponent could make it difficult to refocus when your turn comes up again.

For some users, marijuana causes elevated levels of anxiety. If you are prone to anxiety when you use weed, playing chess might not be a good fit for you. It’s possible that normal twinges of performance anxiety or the stressful sensation of playing with a timer could balloon into unbearable discomfort. Even generalized feelings of anxiety or paranoia could make it difficult to focus on playing the game.

Are there any benefits to playing chess high?

How you feel on weed – or even on different strains of weed – is such a personal experience, that there is no one-size-fits-all answer. There are cases where weed could help you into a good headspace to play chess. For example, if you suffer from anxiety, the idea of sitting down to a game of chess might be daunting. In this case, the right dose of weed might help you to break out of the negative thought loop and focus on the game. If you suffer from chronic pain or other intrusive physical conditions, weed may give you enough of a reprieve from your symptoms to enjoy the game in peace. It’s possible that your sense of focus will fade as the game goes on, so go into it with this in mind.

Weed helps many users to feel more confident, happy, focused, or creative. Any or all of these effects can translate into a well-played – or at least well-enjoyed! – game of chess. You might not play your best possible game if you use weed, but if you aren’t accustomed to analyzing and scoring your games, you probably won’t even notice the difference.

However, if you plan to play chess in any sort of organized tournament or event, be sure to check the official rules before using weed, as participants are often forbidden from using mind-altering substances.

There are cases where weed could help you into a good headspace to play chess.

CBD (cannabidiol) is a chemical compound found in marijuana. Since CBD doesn’t get you high and has numerous health and emotional benefits, its popularity has grown in recent years. Many conditions that people commonly treat with marijuana can be improved by using CBD alone. Since CBD encourages the release of an increased amount of serotonin – which reduces feelings of anxiety – it may enhance your focus. CBD has also been shown to be a highly effective analgesic (pain reliever). CBD creams or lotions may be helpful to chess players suffering from arthritis or other conditions that make the fine-motor action of moving chess pieces painful or laborious.

Hemp-derived CBD products are the only variety that will be completely free of THC, the psychoactive component of marijuana. Again, if you are playing chess in any sort of official tournament or event, you’ll need to verify if CBD is allowed. CBD could be considered a mind-altering substance, despite the fact that it can’t get you high.

Is cannabis allowed at chess tournaments?

Marijuana use is not allowed by players in any FIDE (World Chess Federation) tournaments and could be grounds for disqualification. Since chess is recognized as an Olympic sport, chess tournaments are required to adhere to anti-doping rules. The World Anti-Doping Agency (WADA) classifies all cannabinoids (including non-psychoactive CBD), from natural or synthetic sources, as prohibited substances.

Are there any well-known chess players who use weed?

Considering that marijuana use is enough to disqualify a player from tournament play and has the potential to derail performance, it is unlikely that any notable chess players use marijuana when they are playing in or training for chess tournaments.

Marijuana use is not allowed by players in any FIDE tournaments and could be grounds for disqualification.

Considering the social nature of both chess and cannabis, it’s only natural that people who love both would feel drawn to combine the two. A handful of stoner-specific chess events have been held here and there around North America in recent years. If you live in an area where recreational cannabis is legal, a similar type of event just might pop up in your area soon.

While official FIDE chess tournaments disallow cannabis, there have been several casual chess events specifically tailored to a weed-loving crowd.

In April 2019, a couple of cannabis-related businesses put together an outdoor chess tournament on the beach in Victoria, British Columbia. There were cash and prizes for the winners, and all proceeds earned from the event were donated to local cancer charities.

In 2017, The Peace House DC, a non-profit community center in Washington D.C., hosted a cannabis-friendly chess tournament. Their one-day event, the Canna-Blitz Chess Tournament, was an unrated 7 round swiss-system style tournament.

In 2015, Edward Forchion, a New Jersey cannabis advocate and newspaper columnist, better known as NJ Weedman, organized his own casual chess championship for stoners. After moving to Trenton, New Jersey, Weedman noticed how popular chess was among its residents, and the idea was born. He was able to host this event at a local restaurant, provided participants did not smoke weed on restaurant property.

Another place where chess and weed may naturally come together is in cannabis lounges. Just as in bars and coffee shops all over the globe, it’s common to find friends (or strangers) striking up a game of chess to pass the time while enjoying their weed. Cannabis lounges – the marijuana version of traditional alcohol bars – are poised to become a rising trend in the U.S. states where recreational cannabis is legal.

California is already home to a growing number of cannabis lounges. A few other states, such as Colorado, Alaska, Michigan, New Jersey, and Massachusetts are jumping in on this trend as well. Currently, these lounges are usually not permitted to actually sell marijuana. So you’ll have to bring your own or use it before you get there.

Chess and weed may naturally come together is in cannabis lounges.

Weed and chess – an unusual duo

Weed probably doesn’t enhance your chess skills – regardless of how convinced you are that it does when you’re high. Cannabis has the potential to eliminate distraction (or pain) long enough to help you into a play-ready headspace – though your focus may waver as the game goes on. As long as you’re not attached to playing your best game possible – and you’re not playing in a tournament with anti-doping rules – a game of chess could be a fun and interesting addition to your next cannabis session.