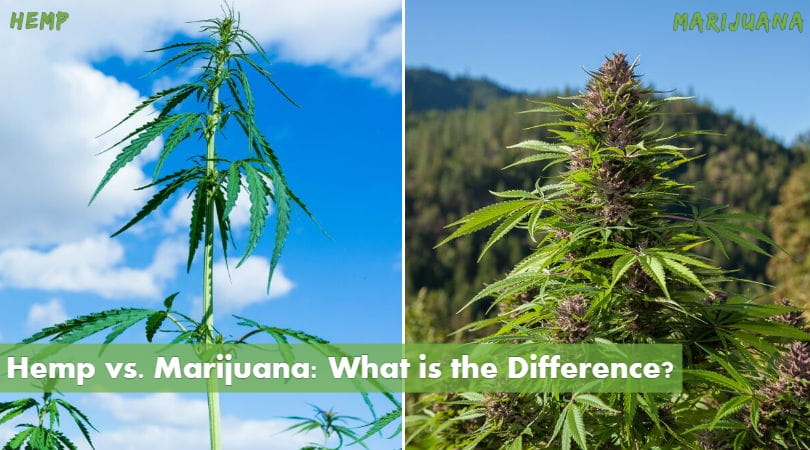 Marijuana might be having “a moment,” with more cities, states, and countries legalizing and decriminalizing its use and cultivation, but both hemp and marijuana have been popular and celebrated for millennia before this.

You already know why marijuana is a big deal, but it might surprise you that hemp was once so valuable that it was a subsidized crop in the United States during World War II, and early U.S. presidents George Washington and Thomas Jefferson both grew hemp in their lands.

Hemp vs. Marijuana: A Quick Guide

If you’ve seen someone speak of hemp and marijuana interchangeably, they weren’t entirely off base. After all, hemp is Cannabis sativa, which is also used for marijuana (the latter can also come from Cannabis indica). Hemp also contains many of the cannabinoids that all cannabis is known for, such as CBD.

Despite the similarities, these two variations get different names because of their drastically different uses. In general, marijuana refers to strains of cannabis used for medical or recreational drugs.

Industrial hemp is a fibrous and stalky plant—perfect for converting to textiles.

What’s in a Name? A Legal Distinction

The difference came about due to marijuana’s legal status in the 20th century. In the United States, federal law prohibited growing, using, or selling marijuana in the Marihuana Tax Act in 1937. However, the value of hemp products at the time was well known. To continue growth of cannabis for hemp products, some states passed legislation allowing cultivation of hemp—as long as it had low concentrations of THC.

Despite coming from the same plant, using the terms hemp and marijuana helped distinguish a legal product from a then-illegal one. Throughout the 20th century, restrictions and limitations on hemp production came and went, at times prohibited entirely.

Today, hemp production is still regulated carefully, and farmers who grow cannabis for industrial hemp must receive a permit to do so. There is an activist movement to encourage more hemp farming, due to its value as a natural resource and to its beneficial role in improving soil quality.

The Difference Is in the Cannabinoids

Cannabinoids play a major rule in distinguishing hemp from marijuana. It’s even in the legislation: almost all states that allow the cultivation of industrial hemp set the legal limit of THC as not more than 0.3 percent.

Different strains of marijuana have unique ratios of THC to other cannabinoids. Selective breeding of cannabis strains can also help produce a desired ratio (and it’s because of this practice that current strains of cannabis are apparently more potent than ever before).

Since THC is the cannabinoid that causes the most noticeable psychoactive and therapeutic effects, most strains of recreational and medical marijuana are bred to have a high concentration of THC.

The higher the ratio of THC in marijuana, the more potent the effects will be, such as a euphoric high, increased appetite, and altered sense of time. This can also result in unwanted side effects, such as poor coordination, paranoia, and—if taken in large amounts—even hallucinations and psychosis.

Q: What are the differences between hemp and marijuana?
A: Hemp is a crop that is legally required to be low in THC, the psychoactive cannabinoid in Cannabis sativa. Hemp is a fibrous plant used to make textiles, clothing, rope, oil, cosmetics, and compostable plastic. Marijuana is cannabis that is used for the drug, so it typically has a high ratio of THC.

Without THC, What’s the Point?

Just because industrial hemp has little to no THC does not mean it’s low in cannabinoids. With THC next to zero, the ratio skews toward the direction of other, lesser-known cannabinoids. In recreational marijuana, the high ratio of THC leaves little room for the other cannabinoids, of which scientists have discovered over a hundred.

Unlike most recreational marijuana, industrial hemp is actually a valuable source of the non-psychoactive cannabinoids that are hard to obtain from marijuana. (The exception is marijuana made from strains of Cannabis indica, which tend to be more evenly split between THC and CBD and thus produce a more mellow high.)

Industrial hemp is a valuable source of the non-psychoactive cannabinoids.

CBD from hemp may be beneficial in treating certain conditions, such as epilepsy, multiple sclerosis, anxiety, and insomnia. In fact, the Food and Drug Administration recently approved the first drug derived from cannabis: Epidiolex, which uses CBD to help prevent seizures in severe types of childhood epilepsy.

It’s not just CBD that hemp offers. Many strains of industrial hemp also boast a large ratio of CBG. Short for cannabigerol, this lesser-known cannabinoid is not psychoactive but has some therapeutic benefits. It acts on CB receptors, allowing it to cause effects like reducing inflammation and pain, and stimulating appetite. CBG is incredibly low in recreational marijuana, often around just 1 percent of the cannabinoid ratio.

Where CBD Oil Comes From

Still, there are a couple reasons CBD oil often comes from hemp instead of marijuana. To extract CBD to make popular products like CBD oil or CBD gummies, you’d want to start with a strain that’s already high in CBD—so THC-rich marijuana may not be the best option. Industrial hemp, on the other hand, is typically packed with CBD.

Another reason? Hemp is legal to grow in more states than THC-rich marijuana is, so it’s easier to find and purchase hemp CBD oil. CBD oil made from marijuana plants can only be produced and purchased in places that have legalized marijuana.

Just be careful to read the label: “hemp oil” can refer to a number of different things, including a cold-pressed oil used for food. Unless you’re looking to make a salad vinaigrette, make sure your product is actually CBD oil.

The oil comes from the flowers and buds of cannabis, and you can take it from hemp or marijuana.

Many people turn to marijuana for its THC, whether they’re looking for the “high” or the medical benefits (such as reducing nausea during cancer treatment). However, THC is also the reason marijuana has been so controversial over the last century. Anti-marijuana advocates worry that THC is addictive, and that the effects of THC (such as impaired coordination and thinking) could put “users” in danger.

This puts hemp products at an advantage. The prominent cannabinoids in industrial hemp, such as CBD and CBG, are non-psychoactive and non-addictive. No adverse effects have been discovered so far, and researchers have yet to find evidence of tolerance or withdrawal from CBD, or the potential for abused use.

In other words, hemp products (like hemp CBD oil) are considered safe, based on all the studies we have so far. This is one reason why hemp products are gaining popularity, despite the lack of THC.

Q: Are there negative side effects of hemp products?
A: Thus far, no adverse effects of the cannabinoids found in industrial hemp, such as CBD and CBG, have been discovered. Based on current research, these cannabinoids are non-psychoactive, non-addictive, and have no potential for abuse.

The Benefits of Hemp—for Global Health

Cannabis is most famous for being a drug, but the plant has numerous uses beyond cannabinoids. Hemp is incredibly fibrous, which is what allows it to be used for things like hemp necklaces and tote bags. The fiber can also be turned into a plastic that’s better for the environment—and ultimately for global health.

What makes hemp plastic so special is that it is a bioplastic—meaning it’s made from plants and is therefore compostable, compared to the more traditional petroleum-based plastic. That means hemp plastic can biodegrade in a matter of months, as opposed to hundreds or thousands of years.

How does all this affect global health? Compostable hemp plastic is easier on the planet, and especially on water quality. It does not pile up in oceans, and it does not leech chemicals into our drinking water. Switching to hemp plastic would help reduce plastic pollution, and thus preserve the safety of our water—and the health of the humans who drink it.

If industrial hemp weren’t so tightly regulated, and were subsidized crops like corn and soy are, you might see more hemp products on the shelves. Hemp plastic can be used for eco-friendly versions of toys, disposable utensils, and—well—just about anything. In fact, Henry Ford once designed a carbon-neutral car made of hemp plastic instead of steel.

Q: What are the benefits of hemp?
A: Hemp is a valuable source of non-psychoactive cannabinoids such as CBD and CBG. Research is ongoing, but CBG and CBD are known for therapeutic effects like reducing pain and inflammation. Additionally, hemp products are eco-friendly and have less negative effects on the environment than alternatives (such as petroleum-based plastic), thus benefitting human health around the world.

So, Is Hemp Related to Waterhemp?

A common and reviled weed in the United States is known as waterhemp. Despite the name similarities, this pigweed is not related to hemp or cannabis. They are from different plant families—cannabis from the cannabaceae family and waterhemp from the amarathaceae family. The two plants don’t even look similar. It may be a weed, but it’s not “weed.”

While you won’t get in legal trouble for accidentally growing waterhemp in your lawn, you might want to take action anyway: This invasive and herbicide-resistant weed spreads quickly and aggressively and can be frustrating to farmers.

The Future of Hemp

The strict regulation of industrial hemp has made it difficult for hemp products to flourish, which is unfortunate considering how valuable hemp products could be for the environment and human health. Hemp could be used to replace much of the non-compostable, petroleum-based plastic that dominates our everyday lives (from our to-go salad containers to our baby toys).

Plus, industrial hemp is an ideal source for booming products like CBD oil, which is a potentially useful treatment for people with certain health conditions, like insomnia, epilepsy, and multiple sclerosis. Limiting hemp production limits access to these products, and we are still just scratching the surface of the full benefits of these less famous cannabinoids.

Q: How can you tell hemp from weed?
A: Industrial hemp is fibrous and stalky, as this allows it to be used to make textiles. When tested, industrial hemp is required to contain less than 0.3 percent of THC, the psychoactive cannabinoid that is prominent in weed.

Q: Is hemp marijuana?
A: Because hemp is legally required to contain little to no THC, it is not marijuana, and it is not used for smoking or inducing a high. However, both hemp and marijuana come from the plant Cannabis sativa.